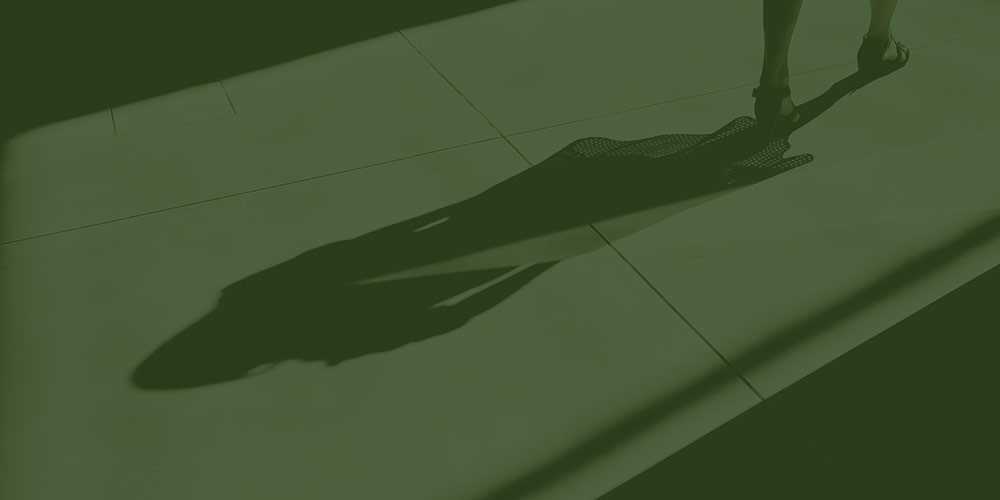 I wake at the bottom of a hole. Ten, maybe twelve feet deep. Goblin faces leering from the roots and shadows. Leaching cold. No way out. The sky above me is a raspberry cheesecake sliced by spindly branches. It darkens at the edges if I stare too long. There is something wrong, wrong, wrong with me. Like I’ve shed my skin and I’m the skin. Aside from rocks and soggy leaves, the only thing in the hole is a phone. Maybe mine. It accepts my thumbprint, so probably. But I don’t recognize the girl in any of the selfies.

The girl’s hair is all tight brown ringlets, even her bangs, and she has a shirt with flamingos on it.  I look down, and I’m wearing a flamingo shirt. I touch my muddy curls. There’s an emptiness inside my head, right behind my eyes, where an identity should be. And in my temples, a headache where there should be memories.

Perhaps I’m a parasitic demon, and I drank this girl like a milkshake. I live here now, in her body. With one hand, I explore. Her stomach is soft and then hard, snowfall on a frozen lake. Her armpits are shaved but her pubic hair isn’t. There are worse bodies.

Too tired to sit up, I keep browsing her photos. Many of them are with the same boy. Blond, with blocky features and a nose that looks like it was punched and healed wrong. Nice smile. Boyfriend, maybe fiancé. I look at my own ring finger, see three little diamonds.

Not all the pictures are photos. One is a screenshot of a Sylvia Plath quote. Kiss me, and you will see how important I am.

Overhead, the sky loses its raspberries and turns the hard white-blue of wedding plates.

The body has a lot of notes on her phone. There’s a long to-do list—tent rental, dress fitting, cake tasting, etc.—and a list of worst fears—delusions of grandeur, someone ice skating over your fingers, achieving posthumous fame.

Sudden crashing in the leaves and branches overhead. A man’s voice calling a woman’s name. Rhiannon! In the body’s texts, some friends call her Annie. Some call her Ree.

The crunching and crackling gets louder, then stops. There’s a face looking down at me, blond and blocky with a broken nose. The fiancé. Hamilton, my mind fills in. Ham.

He asks what I’m doing down here, if I’m hurt. Something in me surges towards him, his kindness, his concern, and I wonder if Rhiannon put herself in this hole on purpose, just for the sympathy.

Rhiannon, what’s wrong? Ham asks again. He points to a set of steps carved into the pit and asks if I can climb. I suppose I can. I don’t know how I didn’t notice that before.

Ham embraces me tightly, and for a moment, I’m subsumed into his warm, solid body. I wonder if Rhiannon loved or feared this, this moment when you dip your soul into someone else’s and it comes out dyed a different color.

I can’t answer any of Ham’s questions, and I can tell he’s concerned, because he says we’re going to the hospital. He leads me through the forest, one arm draped around my shoulders. My bones are whistling hollow. My skin is a gauzy shroud.

Trailhead. Parking lot. A junky blue car with a stuffed dolphin dangling from the rearview mirror. Ham asks me again what I was doing in the woods, and I whisper I don’t know, which is the truth.

He drives us to the emergency room, but there’s a long wait because an entire school bus just crashed into a bread truck, and they couldn’t save the bread but they’re trying to save the children.

Ham says, Fuck it, we’re going to the witch.

Back to the car. He holds my hand as he drives, but he’s just holding snakeskin. I don’t have the heart, or the words, to tell him his fiancée is gone.

I scroll through more of Rhiannon’s photos, hoping this is just amnesia, hoping something will jog my memory. There’s Ham and Rhiannon at a microbrewery, at the top of a mountain, at the premiere of the latest installment of a sci-fi movie franchise. I can’t imagine doing any of these things for fun.

Ham drives us through some nondescript suburbs, parks outside a house that’s green like the inside of a cucumber. There are two signs in the yard, one advertising piano lessons, the other reminding people to drive like their children play here.

When we knock on the door, the witch yells at us to go away. Then she asks if we have an appointment. Then she tells us, alright, come in, but be quick.

The witch has a corona of orange hair and skin like nightgown material. She’s wearing straight-leg jeans and a baggy sweater with black cats and pumpkins on it.

The witch sits us down on a sagging loveseat and hands us foldout menus like for fast-food takeout. The pamphlet tells me that tarot readings are $5 for a one-card, $15 for a three-card, and $30 for a Celtic cross. $50 for a horoscope, $25 for a palm reading.

Ham sets the menu down and says he tracked my phone to a hole in the woods and he thinks evil spirits might’ve sucked my soul out.

Don’t be silly, the witch says. Evil spirits don’t suck your soul out, they make you drop things. Then, to me, Here, love, give me your hand.

Her hand is very warm, or maybe mine is very cold. She slips a ballpoint pen into my palm and wraps my fingers around it. Then she points at the margin of the menu and asks me to write my name.

No, that’s wrong, Ham says, looking at my signature. That’s not her handwriting. The N’s are squashed.

The witch grabs my chin, not unkindly, and stares into my eyes. Definitely not Rhiannon, she says.

Ham recoils. Then who the hell is she?

Just a shadow, the witch says, and I don’t know if she means just like there’s nothing to worry about, or just like I’m completely insignificant, or both.

She’s a manifestation, the witch continues, of Rhiannon’s suppressed desires, fears, and impulses.

The witch shrugs. Somewhere in the astral plane, probably. Don’t look at me like that, I’m not a miracle worker.

Ham shoots me a dirty look. Disgusted, contemptuous. As if I stole this body on purpose. It stings, but not unpleasantly. I know, on a cellular level, that this is what I was meant for, being a dartboard, a punching bag. His cruelty is a spade. The hole inside me deepens.

How do we get rid of it? Ham spits.

Well, that all depends, the witch says. Typically, once the shadow gets what it wants, it dissipates. Which can get you into a real gray zone when the shadow is a child molester or an axe murderer. But most of them just need to break something or have sex with their boss. Some kind of release.

So, Shadow, she says. What do you want?

What do I want? Do I want to become Rhiannon again? It seems like so much work. She was a red-blooded, try-hard kind of girl—harder than I want to try.

Once she broke her finger playing Egyptian Ratscrew. Once she cried in class because she’d gotten a B+ on her midterm. She worked in the tasting room of a winery and sometimes stole bottles from the reserve collection. Weekends, she sang at open mics, bars, private events, anything she could get. She sent demos to record labels and televised singing competitions, sent emails she would never get responses to.

Someone once told her she was good, and she believed them. But what if they were wrong?

The witch asks Ham if Rhiannon was having any trouble lately. He admits that they normally karaoke at this one dive bar on Wednesdays, but this week she didn’t want to go. She just cried into her pillow about how she was basically geriatric in music-time and how some five-year-old just won America’s Got Talent.

Do you mind if I smoke? the witch says, and smokes anyway. You’re an interesting case, Shadow, she says, and I like the way she says it, like it’s my name.

We’re no closer to “dissipating” me, which I don’t feel too bad about because there’s something luxurious about being a personal tragedy. There are no expectations for me. I’m failure itself. I’m painted in blues and blacks. I’m a self-harm scar. A bomb test site after the smoke has cleared.

The witch gives Ham her card and says to call if anything changes for the worse. Otherwise, we’ll just hope to ride it out.

As we leave, I think about people with real problems. People without clean drinking water. People who used to live under the overpass until the city installed spikes there. People kept in basements, pregnant with their stepfather’s children. They say you can’t compare people’s suffering, but Rhiannon’s personal apocalypse is objectively stupid. Which somehow makes it more devastating. That someone with enough money and a nice fiancé and a flamingo shirt could be sad enough to turn herself inside out like this.

Ham and I stand on the witch’s front porch. He’s agitated, chewing the inside of his cheek. Hands in his pockets. Inside I feel completely slack, a deflated black balloon.

There was that brief moment at the edge of the hole, before Ham knew I am the hole, when he was so tender with me. Now he strikes suddenly, grabs me by the collar and jerks me close. Rhiannon, he hisses, tears in his eyes. I know you’re in there. It’s me, it’s me, Ham. Can you hear me? Can you hear me, Rhiannon?

Rhiannon, please. He shakes me hard, as if he can shake her out of me.

His hands are like the roots that bind the earth together, that keep the hole from collapsing in on itself. I think about the note in Rhiannon’s phone. Kiss me, and you will see how important I am.

Ham’s sharp, desperate mouth against mine. His hand tangling in my hair, tightening till it stings. I know he only means it in a true-love’s-kiss-will-break-the-spell way, but I imagine he likes me for what I am, spineless, subterranean, cold.

I don’t dissipate. I darken. I could stay like this for a long, long time.

Rita Feinstein is the author of the poetry chapbook Life on Dodge (Brain Mill Press). Her stories and poems have appeared in The Cossack Review, Permafrost, Five on the Fifth, and Grist, among other publications. She received her MFA from Oregon State University.

SShort Fiction
I write that down and think of Tony perceiving all this. Will he wonder why we went outside to watch a string be cut in two? Will he understand the symbolism? Will his report to whomever convey a sense of community and perseverance? Will he understand why the drinks aren’t included?
SShort Fiction
When the man pulled the body from the bog, it had been flattened like a bear skin rug and carried the consistency of damp glue. Perhaps the fen had done this to the boy, or perhaps it was solely a carrier. They won’t want to see their boy like this, the man thought, and thusly collected the dripping anatomy into his fertilizer bucket.
SShort Fiction
Her mouth folds down, that puppet face of hers, eyes sad and pleading, yet she raises the empty point of gun to his chest. You know, she says, but I have such an incredible urge to shoot you.