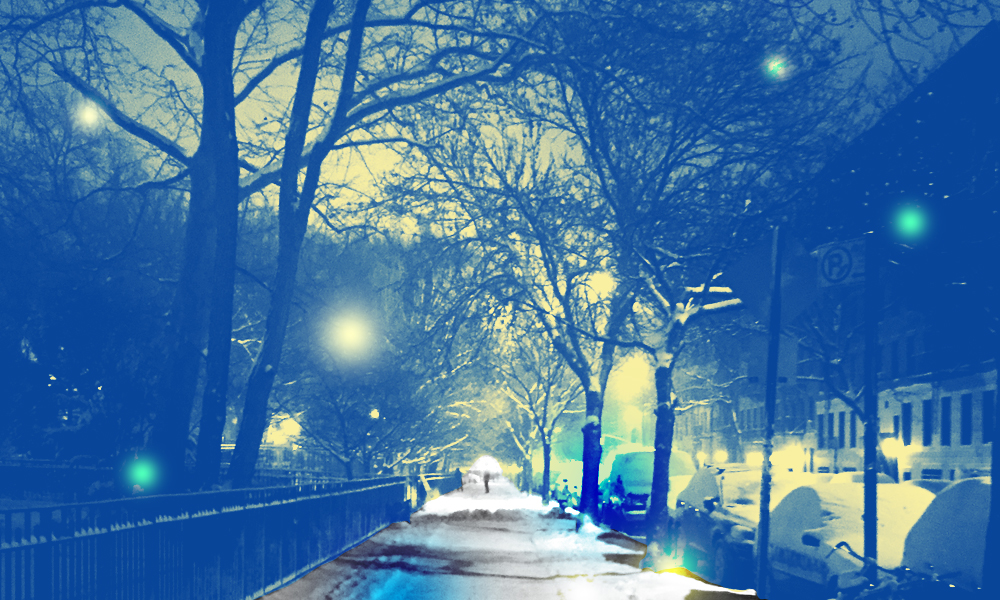 Schedule Snafu at the Cultural Center

Schedule Snafu at the Cultural Center

I’m walking downstairs with Tiffany and Jaime after a meeting; a late March Sunday and the building is quiet.

Tiffany writes poems and Jaime calls himself an urban observer; they both have generations-long histories here on the Lower East Side.

At our meeting we talked about ways young people might find more power in cities.

We’re about to head out the door, each going a different direction into the fading day, when the director of the center stops us.

He says a group of kids from the shelter are on their way over and were supposed to do an art class while their moms watched a play, but the art teacher just flaked.

With a slightly desperate smile, he asks if we could please take the kids on the gentrification tour we planned to do with adults but that no one signed up for today because it’s too cold?

The shelter and the center are run by the same nonprofit, which encourages collaboration.

Tiffany says she has to be home to watch her little sister later, but she can stay for a while.

Jaime is half-raising his cousin, and he’s usually cool with improvising, but right now he seems nervous.

He says he was maybe going to skate by the East River but then Tiffany says Jaime    and then he says okay.

Coated and scarved in the lobby, the kids are game but resigned, like their time is always spoken for by someone else anyway so why not these fools today?

Too old to seem eager and too young to lose hope, they stand and wait, two with little siblings in strollers, all minded by Elaine, a social worker in a light blue hijab under her North Face.

She looks at us, sighs, and tells the kids We’re going on a walk.

Crossing Grand Street, I take the hand of a girl who murmurs her name so low she has to say it four times, and even when she finally shouts, it’s just a louder mumble.

When I ask about her favorite place in the city, she indicates the boy next to her and says    my brother.

He pronounces his name — C o r e y — extra   slowly,   like he knows he has to explain everything to you because you are stupid.

He says his favorite place is my sister and donuts.

Our first stop is a tenement where a storefront called Sublime sells paintings inspired by Street Art™.

On the grownup tour we’d show a picture here of a tank rolling up to this same spot on Henry Street in the ’80s, then another picture of a list: neighborhood landlords whose names and misdemeanors people taped on lampposts.

No heat for weeks.

No locks on doors.

Police took down the list, and people put it back up again: a cat-and-mouse game where power pounces on knowledge.

Jaime would usually riff here about how we see the history of where we stand, but today he just tries to move us to the next spot.

Look up: the kids want to know about the row of cement faces molded into the second-floor façade and smoothed by years of weather.

Is that Jesus? asks Aden.

Duh says Tino, everyone knows that.

My son is eight; I’m used to the serious ideas and the snot.

The kids debate if the brick would look better painted blue, pink, or sprinkles.

I want to say there is something interesting or ironic about how the tenement we’re looking at was built around the same time as the settlement house that runs their shelter; that they built the theater where their moms watch the play so the children of poor people they took care of could have fun seeing clown shows while their parents, if they had them, worked and worked.

But I doubt it’s interesting to the kids that the rich in this city have always found ways to distract us from how hard it is for most people to stay anywhere.

Maybe that’s best saved for the adult tour, so I keep quiet.

The oldest boy Adam — he has to be about 12 — lurks and smirks behind me, unsure if he should fuck with us all or if we’re okay.

He holds a graphic novel called Smile, about a family going through changes.

I say we have that one at my house too.

I tell the kids the Lenape, the original people here, called the island “many hills.”

Someone says it was dumb to flatten it, but those stone guys are probably

Tiffany and a girl laugh on the curb.

Jaime says again we should go.

Look up: a new glass monolith blocks the sunlight that once warmed Baruch Houses and this playground too; the Houses were built in a moment of illumination in 1959 to keep poor people around so the city wouldn’t lose them all.

Now developers bulldoze parks into condos in another game where the whole city is the mouse.

The new tower includes 2,000 units, most of them luxury, plus a Whole Foods, private daycare, and a heated garage.

2,000 votes are margin enough to win a council seat here.

It’s a game someone else in our group calls developer-led gerrymandering.

You used to have to go door-to-door through what people call the projects to get those votes.

Now you just chat with the new owners about your plan to make things more welcoming for business, like we should all celebrate the ease with which business can more efficiently dispense with the people you don’t want to see.

This building is so big I think a princess lives on top!

The kids scatter and play except the two in strollers who wail until we face them toward their sisters and brothers swinging.

Elaine tells us They want us to look at the rich and see what we are not.

Jaime says You should come back and lead this walk with me.

Elaine says Maybe I will.

We cross Pitt Street, taking care to look both ways.

Except Sunita, who rams the stroller into everyone’s heels.

On accident she says.

Sunita calls her red velvet shoes her going-to-a-party shoes, which she says came with a matching shirt she does not have on because she didn’t get to see the play, so it’s not really a party so she only wore the shoes.

Her little sister faces us from her seat in the stroller, hands in the air, pleasantly thrilled by the speed.

As they pass, the sister and I make up a game without words. I decide it’s called Sounds and Hands, which both of us win.

I tell Sunita be careful, but she won’t.

She keeps bumping everyone on her way to the front.

I say her sister is like a warrior princess, looking back at us and peering out sideways with tiny raised fists, but Sunita says No I am the princess damnit because look at the shoes!

A piece of hard candy Corey handed me before sticks to the inside of my pocket; lint slips and grits on my fingers too.

We flatten ourselves against the last sunlit walls.

Another has invitations and plans:    the luxury of home.

Look up: the city crushes kids — especially poor and brown ones — and if you love them even a little while you walk together in the cold, well that falls on you.

Behind me Jaime says to Adam I lived in that shelter where you are, but now I’m out in Sheepshead with my mom.

We pass again by the pink and blue tenements with Noah looking out, welcoming all travelers to our foundering hills.

We are here   the stone faces say.

We could be your favorite place in the city, a still monument to ground that’s always shifting.

The next day the director says thank you.

The moms liked the play.

The kids did art with Tiffany after the walk.

They made crayon maps and clay buildings with fingerprints etched into drying walls.

Their hurt stuck with me the director says.

The way one sat on his lap made him think someone had touched her wrong.

The one whose little sister has the fists?     I ask

It made him think of his daughters.

I thought of my son.

Did you see her shoes?

She is crashing at our heels.

Aaron Landsman is an artist-in-residence at Abrons Arts Center on New York City's Lower East Side. Upcoming and recent publication credits include poetry in The Wax Paper, Ghost City Review, and Evergreen Review, and prose in River Teeth, Hinterlands, Theater Magazine, Painted Bride Quarterly, and Hobart. His new book about democracy and performance, called The City We Make Together, co-authored with Mallory Catlett, comes out with the University of Iowa Press in 2022. His live performance works have been seen on stages, in homes, on buses and in offices, in New York City where he lives, and in other U.S. and foreign cities.

Even This Place Once Had a Mother