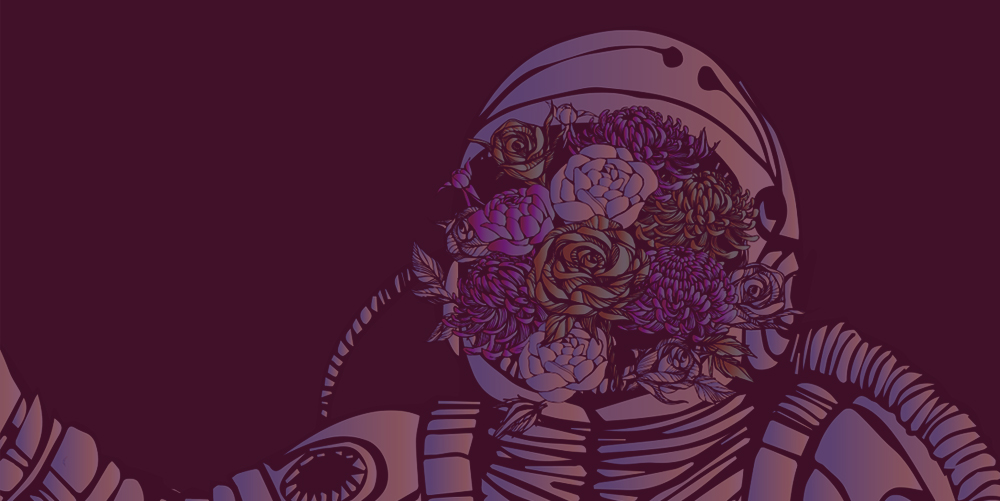 Since the astronaut came back from space, she has been watching The Green Hornet, I Love Lucy, The Honeymooners. She eats cherry ripple ice cream out of the carton, offers spoonfuls to her knitting wife. She tucks her feet up onto the couch, wipes her fingertips on the hem of her shirt. Watches the flickering screen, says, bang, zoom, straight to the moon.

Straight to the moon, agrees her wife.

She could never have gone to the moon, really, says the astronaut, stares at Alice in housedress, stares at wife Alice setting the table.

She would never have gone to the moon.

When she put her hand out in front of her, she could still cover the moon with it.

There you are, she said. There you go.

Men have been to the moon, says the astronaut, spoon upside down in mouth.

Her wife doesn’t look up from her knitting, clack clack clack. She says she is making a scarf; she says all she knows how to make is scarves.

Men, she says, head down, have been everywhere.

The astronaut smiles. It is mid-June and humid; she pulls the scarf tighter. She holds her breath, thinks of the distance between stars, thinks how small the moon seems when she looks up, thinks how close her wife’s small hands are to her face.

Her wife says: I wonder if the skin of a hippopotamus is rough to the touch.

While the astronaut was gone, the couple next door sent the astronaut’s wife flowers — sent her roses and chrysanthemums and day lilies. Sent her alstroemeria and lilacs and protea flowers. Sent them with notes: You’re not alone, We’re thinking of you, Take care, Have strength.

The astronaut’s wife stood on one side of the tall back yard fence and waved to the neighbor couple when they dined on their patio, sipping wine from lovely stemmed glasses.

Hello, she called from her side of the fence, hello, thank you.

She called: I’ve saved the vases.

I’ve saved all the vases.

When they were girls, the astronaut and her wife touched fingertip to fingertip through a window screen.

Bang, zoom, she says, pulls on one end of her scarf and then the other.

Bang, zoom, she says, straight to the moon.

Cathy Ulrich has never seen an episode of The Honeymooners, but she watches a lot of silent films. Her stories have been published in various journals, including Atticus Review, Former Cactus and Sunlight Press.

I'll Love You Until the End of the World