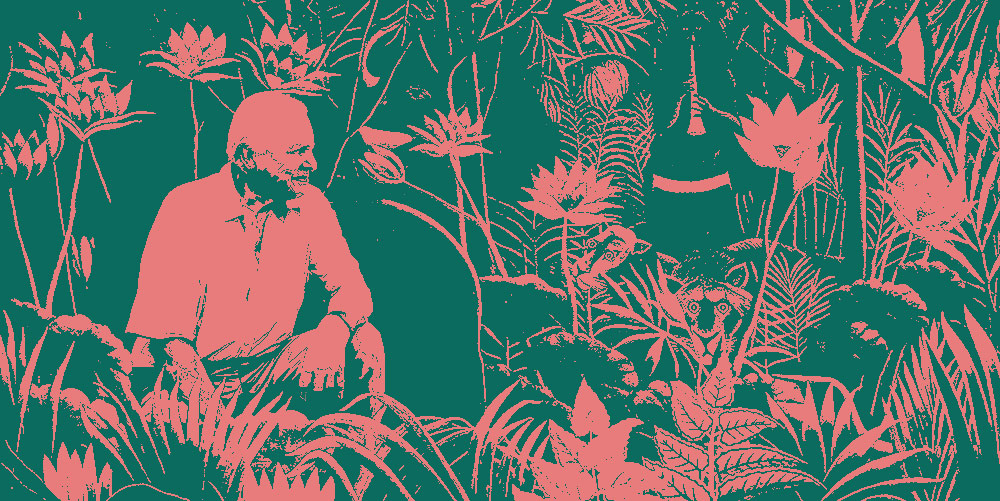 In which Sir David Attenborough speaks of breathing into tiny pockets, of melting the harsh walls of the sea.

It’s been three days since anyone’s been allowed outside. Every morning I wake up and I’m not even sure what to worry about first. Am I sick? Is my baby sick? Is my lover? Then it’s like: okay we’re okay, now: where is the money going to come from, will we be able to pay rent, is rent even a thing at this point? And then also how much food do we have, how long will it last, what will I do when it finishes? God what will I do when it finishes. And then there’s the world, god don’t even get me started on the world. And also I keep hearing people outside on the street and like, what are they doing?

These are my questions.

Let us start out here: in the shallow embankment of a brook. It is a summer’s day and the water is clear, and it prattles quietly on and on and on. You, dear Marsha, are a small rock, wedged between other rocks. You are very smooth and covered in moss. The water passes over you steadily and softly, a pressure of the comforting kind: as though it were a back against which to lean. The sun dances all around, it does so in ripples. You are not cold nor are you hot. You are, in fact, just perfect.

And again, Marsha: a lemon tree in a lemon grove. Spring is about to edge to a close and the bloom is heavy on the branches. You are a bud that has opened the morning prior. The ground below you is slanting, winding down and down into the distance and into the calm stretch of an azure sea. The sky above you is abuzz with bees, with the little creatures of the season. Their cacophony is like a hum, coming and going. Coming and going. The breeze, when it passes, carries the heat and the salt and you let your fingers flutter, light as they are out in the wind.

And once more, Marsha, just once: a mountaintop at the heart of winter. You are the roof of a cabin. The snow falls and falls and you can carry it all, no matter how much. You are built strongly and you can carry all the snow. Inside of you the fire is on in the hearth, and people are sleeping in their beds, the backs of their necks sweaty with the night. It feels as though you are glowing from within, and you could carry all the weight in the world. And you do.

And now let us breathe. Together, I say, we shall do it together: in, and count to three. One, two, three.

And hold, together. Two. Three.

And out, together. Two. Three.

This I have started to write to you in my garden, Marsha, for the sun was out and the grass seemed quite inviting. The weather, however, turned out quite a bit chillier than expected. I have now retreated to the study. It is a common trick of early spring, is it not? When one leaves one’s coat by the door, having felt the sun through the window and thought it warm, only to step out and be nipped by the tail-end of frost.

All the same, I welcome it. The small familiarities of earth are a source of comfort, these days.

My dearest Marsha: have you heard of the ring seal? Mammals though they are, the ring seals spend most of their time in the arctic waters. They hunt in the waters, raise their pups in the waters, they live out their lives in the waters. It is the environment they have evolved for, and are happiest in the cool stretches of the ocean.

However, the ring seals must regularly resurface for air, and do so at intervals of about thirty minutes. In the arctic, the summers and springs allow the seals to do so freely. The seals stay close to drifting ice packs and shores, where they seek reprieve and the occasional chance to soak up the sun. It is the autumns and winters that prove the hardest, when the ocean, bit by bit, begins to freeze over. The seals are then locked below the surface. It is not a cruel place for them to be: it is their home, after all. And yet, the seals must breathe.

And so with each coming winter, the seals begin a process of making—and then maintaining—their so-called aglus: breathing holes. They carve them out by sheer force, with their teeth, and they keep them from closing like so: they breathe on them. Each thirty minutes, throughout the long long stretch of winter, every seal will swim up to one of its aglus. There it will breathe in the cold outside air, and there it will stay, if only for a little while. The seal will bob up and down in the little pocket it has made for itself, doing nothing but breathing. It lets the heat of its body melt the harsh walls of the sea. It lets its breath, puffed as it is, collect. It lets it be the lifeline it needs it to be.

Marsha, you are a mossy rock in a shallow brook. You are a young bloom on a lemon tree. You are the roof that can carry the snow, you are the very breath that keeps you going.

Now, and again, together. I say, we shall do it together: in, two, three. And hold, two, three.

There, haven’t we done that beautifully?

Haven’t we done that masterfully?

Yael van der Wouden is a writer and mixed-bag diaspora child situated in Utrecht, the Netherlands. One time she rescued a mouse from being eaten by a snake, but when she took the mouse home the dog then got it. This still makes her sad. In her advice column, Dear David, she channels the beautiful spirit of Sir David Attenborough. She's currently working on a novel that she'd taken to describe as 'kind of Cruel Intentions but then like everyone's bi.' She can be found at yaelvanderwouden.com.

to say i want to take a big glorious shit,