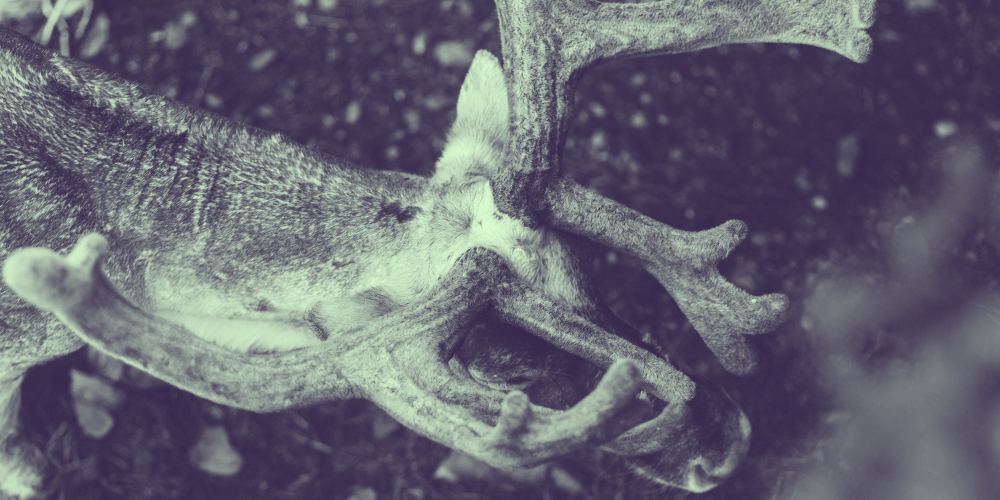 He wasn’t born this way, didn’t wake
from mother-womb heavy antlered.
This was planned, all of it. Careful cultivation
of teeth that could snap open any ivory
left for him as an offering until he could find sweet,
fresh marrow. Enough calcium to grow bone out
into wide branching limbs, a crown his own body gave him.
Nature proclaiming him Lord—

have you ever stumbled on a deer? Velveteen
hanging in stripes of flesh from their prongs, blood
still fresh and unexpected around their mouths.
There’s a hunger there you don’t want
to claim, don’t want to follow you home;
don’t want to come across, lost in the woods after dark.

The boys have never seen him, don’t believe he’s real, but the girls all whisper about the latest boogeyman, the Deer Lord they see outside their bedroom windows at night; the deer who wears a human skull over his own face. His head so heavy with it and his forest of antlers he shouldn’t be able to hold his head so high, but he does.

The boys are sure the girls have mistaken a wolf for a deer, or a man in a pelt. Deer don’t look at the world with the kind of hunger the girls describe, don’t come out of their meadow dripping blood and black eyed—but this one does and all the girls wonder aloud which one of  them will vanish one day because the Deer Lord  found her on the far side of the glass after dark, coaxed her out to be his bride. The girls argue about who among them has the same taste for blood, try to forget how they too have cut their fingers, sucked their own blood, how they liked the taste.

Deer Lord hasn’t told her yet,
but he’s found his bride, has named her.

A mortal name doesn’t suit a bride of the Deer Lord,

so instead he will call her Jewelweed;
wild cultivation who bursts, ruptures, and soothes.

My father lost me to his hunger, to a line of does,
button bucks left to hang from the neck, bleed
from the belly until even the flies didn’t come
anymore, even the flies knew

there was nothing vital here. He was hungry
when he hunted them for their blood,
their chase, but in the end he ate neither.
In the end they were just a collection, a barricade

of wasted bodies blocking the water pump,
attracting carrion crows, larger predators. The coy wolf,
who came to see what to make of the newest monster,
the one who named himself man, whose cubs shook

before all the flesh he didn’t consume. I was one of those
cubs who went for water, found empty eyes
accusing me of being unable to stomach their flesh, for my father
who’d forgotten them. I couldn’t stop myself

between my blood and theirs. I sought warmth,
another body; following instinct I found myself
curled inside, a hermit crab seeking a new home.
I could expand easier here. Re-bodied,

the cord slipped free of my neck, wound sealed and I ran
staggering and unsure of my new four legged-ness.
By the time I reached where mother trees still stood, I’d forgotten
I had been Girl. I was far more Earth.

There is something new in this wood.
There is an empty girl-bed, a window left darkened.
There is a new hunger that has yet to learn sate.
There is a bride in this forest seeking—

E.B. Schnepp is a poet from rural Mid-Michigan who currently resides in Indiana. Her work can also be found in McNeese, The Laurel Review, and Cumberland River Review, among others.