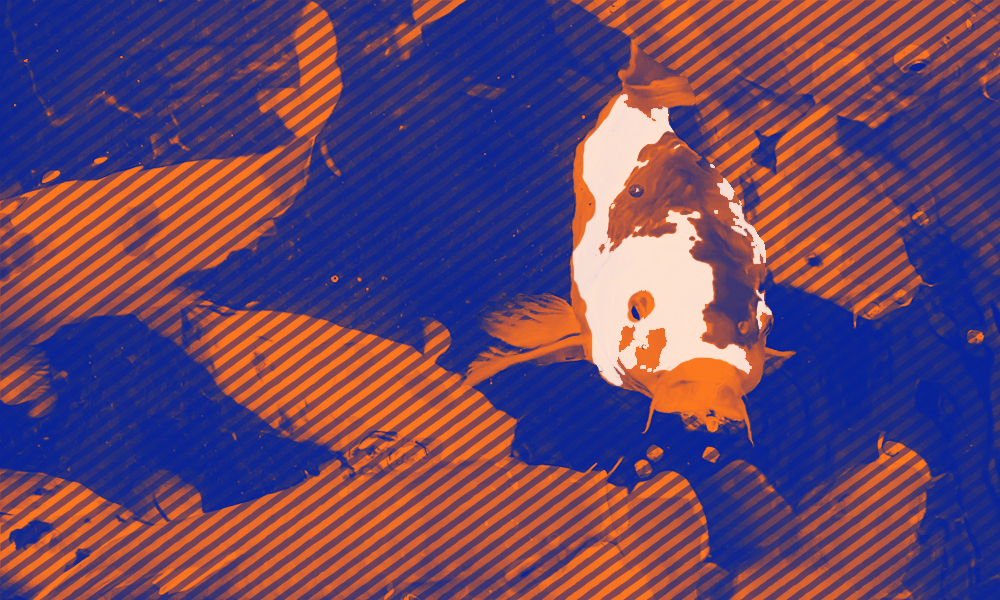 Something is wrong with the fish in the koi pond outside my mother’s floor-to-ceiling bedroom window. There are three of them, small golden-orange, medium marmalade, and large vermillion with black markings. Last time I visited for the weekend, I named them, in reverse order of their descriptions and with no assignment of gender intended, Kurt Russell, Goldie Hawn and Kate Hudson.

My mother’s husband says he thinks one of them is about to give birth. Then he says the big ones usually eat the young, but that they’re pretty good at hiding among the hydrangeas growing hydroponically in one end of the pond. I haven’t seen new fish born here in some ten years, but perhaps that’s why, maybe they’re not so good at hiding after all. I idly ask him whether they’re born live or laid as eggs that hatch, vaguely aware that I should know the answer to this myself. But I’ve asked because of the way Goldie is canoodling against Kurt, as if he’ll be trying to catch the babies in his mouth as they’re born.

My mother is in a hospital bed next to the window, where she’s been for the past 60 days after her husband unilaterally—that is, without discussing it with me—decided to engage hospice care for her. She can look to her left and watch the fish, or to her right to see the fluffy apricot tabby, who is keeping careful watch over her from a chair upholstered in burnt-sienna plush across the room. Mostly though, she sleeps, waking to eat bland meals of rice and boiled chicken, to have her sip of amber bourbon with the five o’clock news, and to occasionally answer her cell phone when I or another well-wisher calls, whispering her responses, I love you, I’m glad you called.

I may be acting as strange as the fish, now sitting quietly next to her as she sleeps, no longer wandering her room aimlessly, no longer flitting away to run errands or finding excuses to grocery shop, cook, or check my email, anything to take me away from the half-frozen confines of a room with no escape for her. I always envisioned it being this way, but this is the first time I’ve actually done it. She and I are of a piece, rarely slowing down, much less sitting down for any length of time. Only two weeks ago she raged against the hospital bed (I’m told), insisting that she could get up and into her wheelchair to go to the kitchen for her mid-day meal. She told of seeing cloaked figures, she pressed the buttons on her bed until she attained a slope nearly to the point of sliding off in a heap on the redwood plank floor. I hold her hand, feeling her paper-thin skin, dry as a bone, thinking of the implications of her hallucinations.

By the time I arrived, two days after the “incident”, she had recovered sufficiently to sit up in bed calmly for two hours visiting with one of her granddaughters, who regaled her with memories of “Grandma’s Days” at her house when my dad was alive, telling tales that made her smile and sustained her in good spirits for the next two weeks. But she eventually crawled back into the ache of her existence, no more grandma’s days, only the lonely silence of the musty room with the big window and view of the ocher fish.

I fear these fish are we three, my mother, her husband and me. He hovers over her, like Goldie after Kurt, as she floats and undulates in her half-dreams, me staring out the window, wondering if the fish might be dying rather than giving birth. Other times, her husband just sits silently in the room, never giving us a last chance to make peace, for me to whisper you’re forgiven, or for her to give me a deathbed confession. I am like Kate, the small fish, lurking among the plants, hoping for leftover scraps—of attention, of wisdom, of a story of my life as told by my mother.

The nurse says it could be six days or thirty, her husband tells me, after I’ve been here a whole twenty-four hours. I think of how I’m planning to leave earlier than usual today, to get home for a small dinner party my yoga friends have planned. I think of how many times over the past decade, ever since she began to have falls and sicknesses, that I’d told her of a business trip or small vacation I was planning, always with an implicit please don’t die while I’m gone, or please don’t make me come back early—or not go at all, as happened when I canceled my 50th birthday trip to Las Vegas with my three best high school girlfriends on fear that she’d had a stroke, when it turned out to be an adjustment to a new combination of medications. There is a photo of them, with Diana’s 21-year-old daughter as a stand-in for me, in front of the replica Eiffel Tower that turns up in our Facebook memories every summer.

Now when I come here, I pack my laptop and a few extra clothes suitable for Zoom meetings so I can work if I need to stay past the weekend.  I don’t know whether I could do it even for six days. I could not, would not, be able to manage for a whole month.  Should I be encouraging her, telling her it’s okay to go, go if you are ready, don’t worry about me . . . we’ll figure out our karma in the next life, this one turned out to be too painful. We were both surprised at my father’s early exit, the turn of events when she almost immediately took up with her high school sweetheart from fifty years ago, whose wife had also died recently. For her, it was a chance at another life, like being reborn, but we didn’t feel like celebrating, and one by one my brothers drifted out of her life, leaving us both bereft.

Skittering inside from the coffee I’ve been drinking all morning, perfectly still on the outside, holding her hand, listening to the surging hiss and hum of the air mattress regulating, I contemplate the fish.

Perhaps, I think, we are all experiencing a kind of birth after all, she laboring and I midwifing, her husband playing the role of nervous father, not sure what he’ll do after the sacred event occurs, not sure what to do now.  We swim in uneasy circles around each other, and all the while the golden sun continues to rise and set, keeping its own mysterious time.

Emilie Fox lives in Northern California with her family. She enjoys long walks with her dog, as well as experimenting with writing poetry and other forms of creative expression. Her work has been published in local literary anthologies Impressions and Havik, and she has a poem in the upcoming Heron Clan 8.

In a Dream I Speak Perfect Mandarin