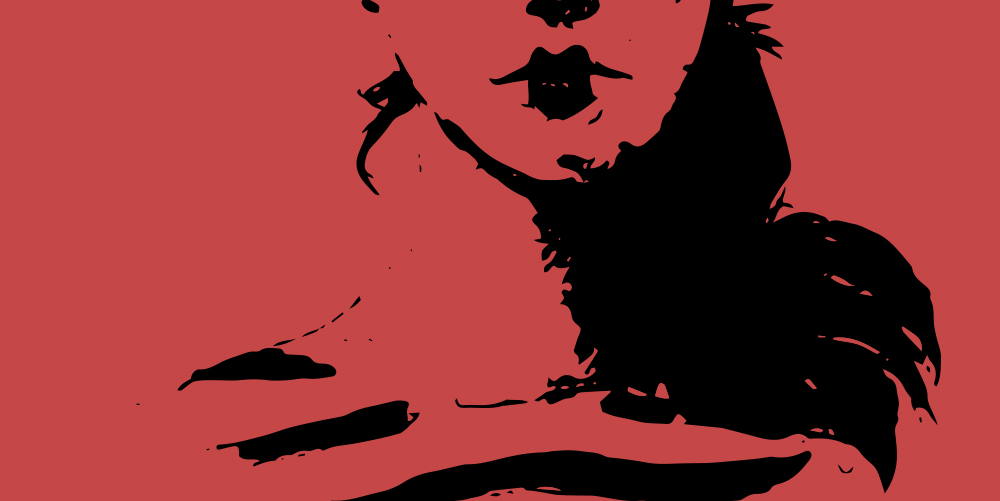 The Mime-Artist is a Little Drunk But That’s Okay

The Mime-Artist Is A Little Drunk But That’s Okay

The Mime-Artist slides her white-gloved hands over an invisible wall. It’s seriously slippery, and she can’t get a grip.

Her husband says, “You need to get a grip.”

She knows what he means.

She investigates an invisible tree, strokes her fingers over its branches. At the end of one, she plucks an apple and holds it up to the light.

She widens her eyes, makes moons—when in doubt, this is what she resorts to.

“I’m going to France,” she says, studying the apple, turning it. “Saint-Malo.”

She crunches in, making no sound.

“Professionally, I need to.”

Brittany Ferries—and a litany of texts.

The water washing up against the portholes.

Is there somebody else?

The grey slit of the horizon.

Do I know him?

Do I know you?

A small boy notices her scanning the port.

“France is huge,” says the boy, demonstrating with his arms, spreading them wide. “This big.”

The Mime-Artist wags her finger, shakes her head.

She places her thumb and forefinger together—squeezes tight.

The bedsit is as expected: enough for one person to get drunk in.

A yellowed fly curtain, a dubious stain on the wall.

An Armenian couple next door shouting.

She lip-synchronizes and makes exaggerated hand movements, predicts the lengths of the Armenians’ pauses.

Later, she brushes her teeth in the mirror with a non-existent toothbrush; flosses without floss; smiles without feeling.

In bed, with her knees up to her chest, she dials an invisible rotary phone and drinks real cognac, getting into the conversation.

The next day, a small crowd gathers around the Mime-Artist. She has set up her brown leather suitcase in front of a small crêperie.

She pulls out a ladder—a very long one, one she can hardly keep upright because of its unwieldiness.

The ladder is invisible, but somehow the Mime-Artist manages to land her feet on the rungs, and she begins climbing the ladder, straight up into the air.

The crowd gasps, and for a minute, the Mime-Artist feels that familiar rush. In the act of mimicry, she is who she is. She is whole and unencumbered—she could carry on climbing, defying gravity, filling people with joy, it could go on.

She misjudges one rung, and falls.

“I have some loose ends to tie up,” says the Mime-Artist over the phone.

Static now on the other end.

How do you mime static? she thinks.

By loose ends, she means once you start pulling you don’t know where the thread’s going to go.

She walks the city’s walls—the ancient ones buttressing the old town, keeping the tall slate houses tight and locked in. The English Channel masses in the distance—layered grey and uninviting.

The bottle she carries is real, each sip she takes is real, her heart beating invisibly in her chest is real—but she knows that nothing is really real until you have mimed it.

She puts down the bottle, puts down her hat, waits for the crowd.

Jonathan Cardew's work has appeared in Passages North, SmokeLong Quarterly, Wigleaf, Cleaver Magazine, Cream City Review, and many other publications. He was a finalist in the Best Small Fictions 2016, The Wigleaf Top 50 2017, the Neutrino Prize 2018 (Passages North), and The SmokeLong Quarterly Award for Flash Fiction 2018. He edits fiction for Connotation Press and runs the MicroViews column at Bending Genres. Originally from the UK, he lives in Milwaukee, Wisconsin and tweets @cardewjcardew.

FFlash Fiction
The two of you have matching tattoos and yet she does not know the plunging depths of your self-doubt. You cannot let her know. You cannot let her know because she envies you—your witty captions, your nonchalance.
FFlash Fiction
My little sister DeeDee drowned but they brought her back and now she is my dead grandmother. On the first day back to school, she accidentally bumped into Stanley, that fifth grader who looks like a seventh grader, and said, oh, cheese and rice.
FFlash Fiction
I imagined that necklace in a museum someday, the history of a world that had burned away etched on each bead with a safety pin. I wondered if the people in the new world would know the word museum.