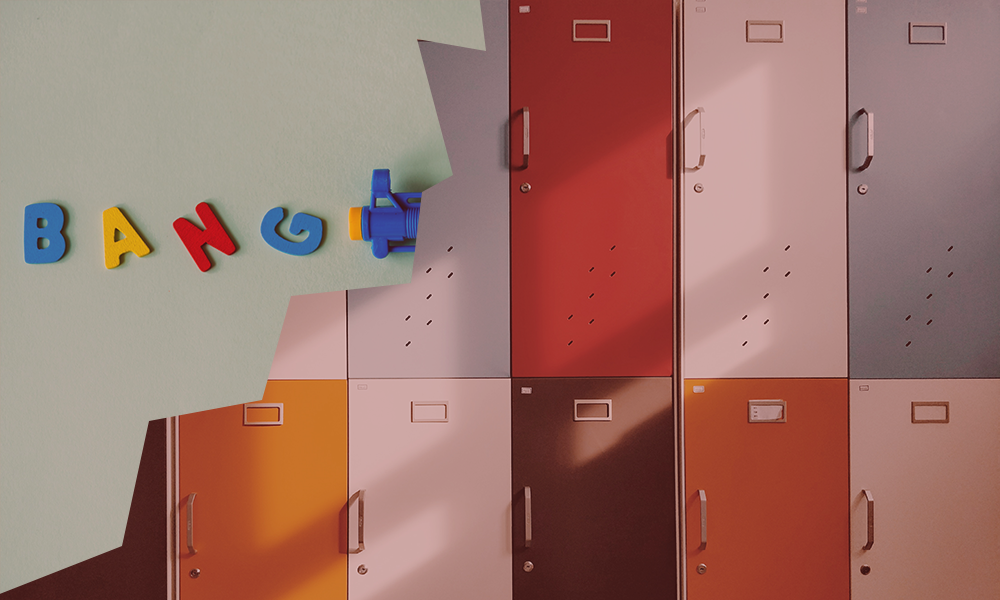 When the Shooting Started

On day one hundred and two of the shooting, no one stopped to ask, “What was that sound?” No one pulled the fire alarm or snapped the lead in their pencil while circling D. All of the Above. We did not text our mothers or cower in closets. We simply continued to dissect frogs and decorate the gymnasium for prom just as we’d done on day one hundred and one. We studied for Physics exams and wrote our book reports. We kissed our crushes and came home after curfew.

On day one hundred and three we went to pep-rallies and basketball games. We taunted the away team, and toilet-papered the home team’s locker room while Billy bled from a hole in his leg.

“I’m fine,” he said, “It’s fine,” and hurled a roll of extra-soft triple-ply into the showers. It landed with an uninspired thwack on the wet tile floor. “Oh well,” he said. “I’m not feeling so hot,” he said.

We lost the game after Dylan took a bullet to the back. Nobody called foul, but we did use our last timeout. Theo was 6’7 and refused to get back in the game. “I waited in line for seven hours for these shoes,” he said, navigating his teammate’s insides with tiptoes and hops.

“Rudy,” the coach said to our beloved benchwarmer, “it’s your time to shine,” and handed him a mop to wipe the pooling red off the polished maple floor. The janitor was old and had already gone home for the day after the spray from a shotgun grazed his arm.

As the shooter stalked the halls of our school day in and day out, we looked for candid photographs of ourselves in the yearbook and read Of Mice and Men. We snuck smokes and traded lipsticks, tried pot and got our driver’s permits. We auditioned for the lead in the school play and made the varsity cheerleading squad, but when Alexa said she and the shooter had been texting recently, some of us decided to try another sport. “I am not leading him on,” she said. “I swear,” she said.

The shooter took interviews with the media while we got into Harvard and film school and beauty school. “When will you be done?” they wanted to know. “When will this stop?” We toured college campuses and fought with our parents.

We talked of backpacking through Europe and falling in love with a French girl who’d teach us to roll cigarettes and feed us lemon meringues on the balcony of her studio apartment. We planned Prom-posals and senior pranks. We made documentaries about our lives and took black and white photographs on film. We captured the cheerleading squad all dead in a pyramid—their finale routine. We held our noses and breathed through our shirts to avoid the fetid odor of steel and bleach and offal, which permeated from our lockers, our shoes, our desks. We took out our iPhones and filmed the quarterback using his helmet as a bowl to hold the blood leaking from his neck. “They’ll need this, right?” he asked wearily and alone at the fifty-yard line. “They can put it back in, right?” We posted it all to Instagram and the media asked if maybe we were faking it, pretending to die, lathering ourselves in pig’s blood, using props from the drama department’s production of Hamlet.

“We’re going to make it,” we told the quarterback, told each other. “He can’t do this forever,” but day after day we called our parents to tell them we were okay. “He didn’t get us today, Mom, but he got Mr. Dodge, the Economics teacher.”

We called our local representatives to thank them for their thoughts and prayers.

“What does a prayer feel like?” Jamie wanted to know. “Are they praying right now?” she asked, sniffing the air like maybe you could smell them before falling facedown in her chicken tenders.

Sudden blasts like a box of fireworks left at the end of a driveway in May sounded off during study hall, detention, fifth period, or in Jamie’s case: the cafeteria. Some of us still found it impossible not to flinch even if the urge to push a desk against the door had long since dissipated—the inconvenience of a gun at school as inconvenient as a pop quiz in Mr. Kim’s history class.

The shooter waved to us from across the sea of seated students. He offered a thumbs-up as if he’d done us a solid by putting Jamie down, who, mere moments ago, was simply trying to determine the mass and olfaction of prayers. Picking bits of skull and brain from our lunch trays, it was impossible not to think, “At least it wasn’t me.”

“Excuse me,” the janitor said, his arm in a sling. “I have to clean this up.”

We were no longer dying of boredom, but God what we wouldn’t give to be bored again. To die from it would be divine.

We wrote things like, “Life is an active shooter,” in the margins of our textbooks, our notebooks. Each day we stepped over another lifeless classmate on the way from Phys Ed to Comp 1, wondering if we’d done anything to offend the shooter—like did we forget to invite him to that kickback in Leslie’s basement last weekend?

Had we done anything wrong at all?

We did not know him before this.

He was our friend before this.

He was a loser before this.

He’s so popular now because of this.

Miranda’s dad held a seat on the city council and told us she’d overheard him discussing an initiative to hand out guns in Homeroom. Last night she went to the indoor range. “So I can be ready,” she said. “If he ever comes for me.”

Brianna asked to be excused from class because no one had seen her cousin’s best friend’s brother since first period, and she’d once held hands with him in the back seat of her father’s minivan. “I need to grieve,” she said. “But is he dead?” our teacher asked. We haven’t seen Brianna since, but Louise said she’s home with strep.

Lots of kids were getting strep, pink eye, lice—the contagious ones. The ones that could keep them home.

He came for Miranda, and all her hours at the range amounted to forgetting where the safety was the moment she needed it the most.

The Mayor came on the television night after night to commend our bravery, our vigilance. “Stay vigilant,” he said when pressed about his plans to keep us safe. “Just make it to graduation,” he said. “That’s not so hard, is it?”

We did as we were told, and went to funerals with tombstones that read, Here lies Danny who died solving for X.

Our neighbors sat late on their porches with revolvers at their sides and shotguns in their laps as if they suspected the shooter’s plan was to leave our school and come for them next. But we knew he’d never leave, and they’d never be heroes.

“Has anyone just asked him to stop?” suggested our mothers as they served us green bean casseroles and pot roasts for dinner.

“Soon all of the children will be dead,” the television said. “And there will be no one left to shoot,” it said. “Problem solved,” it said.

When he came for the last of us, we fit into one classroom. “Don’t worry,” our Principal said. “He can’t get to you in here.” We asked if we could take the tinfoil off the windows—it was such a beautiful day—but Principal Peters laughed at our naivety and messed our hair with his soft, soapy hands. “I’m proud of you,” he said. “You are our future,” he said and closed the door—the only exit we’d been assured was heavily fortified in the event of an attack. When the lock clicked and deadbolt slid, the shooter revealed himself to have already been in the room the entire time.

Crumpled in heaps, we said our goodbyes and thought of our siblings; our girlfriends and boyfriends, our grandparents. The shooter seemed somewhat satisfied, as if he might finally head home to hang up his rifle and coat. But before he could leave, Mary Katherine spoke. Miraculously untouched by his assault and impossibly left standing, she startled the shooter as if his superior had caught him slipping out early on a Friday without permission. Burdened with a responsibility she’d never known before and hoped to never be tasked with again, MK moved her mouth to ask something profound, something meaningful and necessary—something to explain all of this. But all she could mutter was a singular and quiet, “Why?”

“Oh,” he said. “I didn’t see you there,” he said, and his finger twitched, but the rifle remained lazy in his hands.

Max Andrew Dubinsky currently resides in North Carolina where he writes, photographs, and edits video for a living. His fiction has appeared in Cheap Pop, and you can read/watch more of his work at maxandrewdubinsky.com or follow him on twitter/instagram: @maxdubinsky.