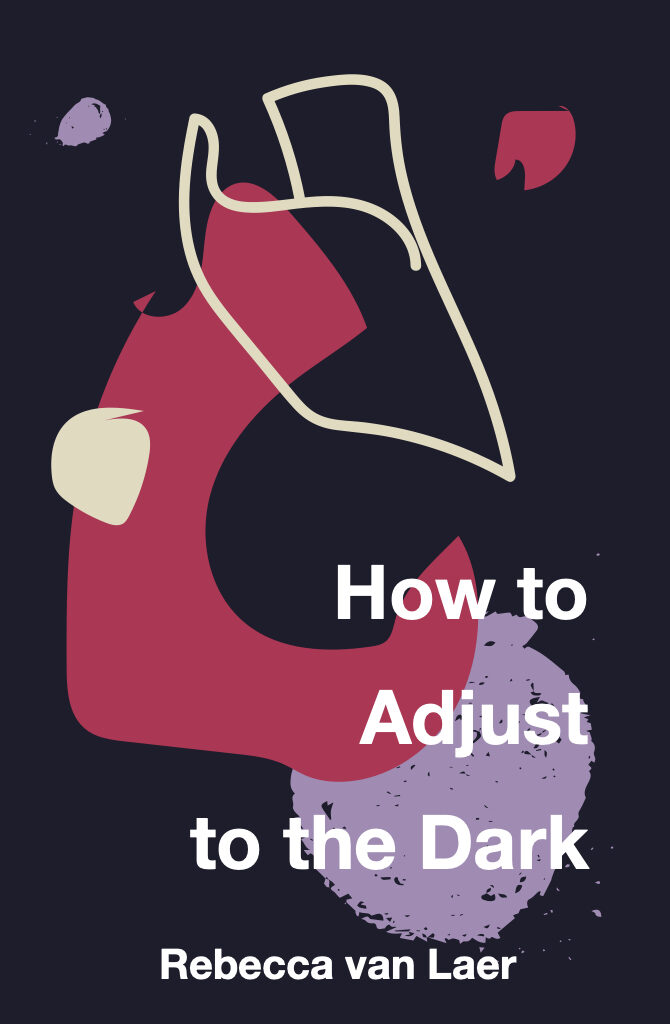 “What else is possible?”: An Interview with Rebecca van Laer

Rebecca van Laer is a writer based in the Hudson Valley. Her work appears in Joyland, TriQuarterly, The Florida Review, and elsewhere.

Click here to order How to Adjust to the Dark
from Long Day Press!

What brought How to Adjust to the Dark into being, and what inspired the start of this project?

This book — probably like all books — had many beginnings. The simplest answer is that I felt my poetry was increasingly bad, so I decided to try prose. Another is that the book started as something close to a joke. I had for years been in a PhD program, yet always told people, “I’m also a writer,” so of course friends always asked what I was writing. I started saying that I was going to “Pale Fire myself.” The first half of Nabokov’s novel is a long poem, and the second half is a series of footnotes — the narrative unspools through those annotations. My idea was to spin a narrative from my own poems. It took me a few months of saying this to decide it was actually a good idea.

I did a little research and found that this book has had a few different iterations before getting into its current and final form — tell me a little about the journey that HTATTD has taken to get to where it is today!

Yes, the book has had quite the journey! In 2017, I placed the book with Curbside Splendor. At that point, the manuscript was about 10,000 words longer — the narrator ended up in New Orleans, where she turned from poetry to tarot reading. In 2018, the staff at Curbside quit, leaving the publisher as the sole employee (the whole story is in LitHub). I withdrew the manuscript, and, while I sought out other publishers for a while after, I knew the book needed revision. It didn’t even include the titular poem “How to Adjust to the Dark!” By early 2021, I was much more experienced as a prose writer and plotter, and I finally reworked it with a tighter timeline and clearer through-lines in terms of character and setting. I sent it directly to Long Day, which had published a chapbook of the poems in HTATTD in 2018 and started to publish novellas in the intervening years.

HTATTD is classified as a hybrid work — how did you come into hybrid work, and what was your introduction to it?

As an undergraduate, I discovered two kinds of contemporary writing I loved: flash fiction and long poems. I think my first introduction to the former was Lydia Davis’s Almost No Memory and, to the latter, Anne Carson’s The Autobiography of Red. I saw both these forms as subverting the expectations of the genre, especially in terms of the most popular forms (novels and lyric poems). As I sought out more books like these, I saw a fuller spectrum of what hybrid work can include (theory, biography, found text, images, annotations, etc.). I was also really into M. M. Bakhtin, who says, “a novel can be anything,” and I’ve been especially interested in how true that is and what we gain by embracing it.

What does hybridity mean to you as the writer of this novella? What do you think this form does differently for the reader and the experience of the work as a whole?

This book operates on a few levels: that of the plot and narrative, that of the poetry, and that of the analysis. When reading fiction, I love to get caught up in the whirl and momentum of narrative, so much so that I’m sometimes skimming or skipping ahead out of curiosity and anticipation. While HTATTD isn’t exactly a thriller, I hope that the narrative engine propels the reader forward. Poetry requires a slower kind of attention to savor and understand. Finally, the analysis is more objective and can also encourage the reader to analyze and consider their interpretation versus the one provided. While hybrid manuscripts can contain any or all of these genres and many beyond it, I think that the different textures of the reading experience and the different attentions they demand can help them linger for longer in the reader’s mind and open up more questions.

When building this incredible book, how did the form take shape? Did the poetry come first or the prose? Vice versa?

The poetry came first — I wrote the first drafts over about a decade starting at eighteen (although the poems were edited while writing the book, some substantially). Thinking about my own trajectory as a person and artist helped me arrange them into a scaffold for the narrative. The prose came again and again and again through the process of the book’s many forms. I think I started it about two years before I placed it with Curbside, revising it a few times before it ended up there, and then doing that other big revision to get it closer to its final form.

The novella opens with a fortune cookie inscription/heroic couplet. This truly made me smile because I love the magic of this — it feels representative of the novella as a whole, speaking to the armors we use to protect ourselves. Was this visual parallel intentional? How did this become the “first line”?

I absolutely love that you’ve pointed that out — I never saw that resonance, but you’re totally right. This fortune cookie could be considered another one of the book’s many beginnings. I opened one with this fortune, more or less (there was no line break). In that months-long period between talking about the book and actually writing the books, I was looking for a way to begin. That real-life piece of magic provided it.

I love how truly entrenched in the personal, the body, love, and popular culture this book is. What elements of yourself did you find yourself writing toward most often?

It was easiest to write about love, since so many of the poems I was working with are about love. They sometimes show a speaker trying to make sense of themself through a relationship, and sometimes to become different person as a result of loving or being loved. It’s funny to me now that the first draft of the book turned totally away from this topic in the final pages (towards tarot and yoga, which are spiritual practices, but also in a way part of the pop culture of our era). Eventually, it became clear that this is really a love story — as much as what it means to love and accept oneself as it is about romantic love with another person.

As readers flip through the pages, even before reading, they’ll notice all-black illustrations of shapes throughout the text. Why did these become part of the final book? What do they mean for the context of each vignette?

We tried many cover concepts — Alban Fischer designed a gorgeous first cover for Curbside, but I felt the new revision needed something new and specifically something more abstract, related to the process of painting rather than the concrete symbols in the poems. Josh Bohnsack at Long Day Press sent one cover concept that overlaid those vector images, which I really loved, and some of them made it onto the final cover. Those shapes then became part of the interior, which resonates with the book itself as a project about reuse. I don’t know Josh’s thinking on where each one falls — and haven’t done any of my own — but I do love how they turned out!

When looking at the table of contents I noticed that the section titles read almost as a poem on their own; was this intentional? If so, tell me about how this happened! If not, wow, because it’s truly a thing of beauty.

This was not intention at all, and it was such a pleasure to read through it with this lens in mind! Thank you for this insight.

Self-reflective work is difficult and investigates the deepest parts of yourself, softened by fictionalization and nuance. How did you care for yourself as you wrote this work? Do you have any self-care tactics that might be helpful for other writers as they navigate this kind of writing?

While writing the first draft, I had a number of self-care rituals: daily morning meditation, yoga, frequent baths with salt and crystals, and new-moon apartment cleaning. Now, my practices look quite different, although I do try to meditate or do Feldenkrais movements in the morning. I’m a big gardener these days! I think what all of these practices have in common is trying to clear a space within the self that is not occupied by the writing or the feelings it’s dredging up. For me, it’s important to remember that I am not the text, or the events and experiences that compelled me to write it — I am also someone beyond that, and I can also experience the world and my body through other parts of myself. This is often easier said than done, and I’m a big advocate for stepping away from a project when it feels too raw. Taking a few years before revising this book helped me return to it with much the perspective that comes with time.

The original draft of the book had quite a bit of writing about H.D., whose Tribute to Freud and HERmione were both very important to me during its writing. As a student of Freud and a mystic, she is often thinking about alternatives to psychoanalysis — a way to make sense of the self and dreams and desire that does not circle back to repression or castration anxiety or, really, our experiences as fundamentally shaped by our traumas.

While I was writing the book in conversation with many hybrid texts, I also thought I was being quite original. Then a friend told me that Dante did exactly the same thing in La Vita Nuova, which is absolutely true.

Very recently, I read Naomi Washer’s Subjects We Left Out, which was such a fun one for me, because Naomi’s book is similarly a narrative about love and longing that is punctuated by poems (in this case, poems that the narrator is translating from French to English). I’m excited to continue finding the literary siblings of my book, past and present!

I hope the readers are pulled through by the thread of the narrative enough to focus on the non-narrative passages and think about the value of reading — as much as it is a book about writing, it is also a book about reading, in which the act of interpretation is as fertile a place for self-revelation as writing.

The penultimate line asks, What else is possible? I think that’s a central question of the book — to figure out what is possible when we shed “the armors we use to protect ourselves.” To think about the possibilities within our writing — and our reading — beyond what’s “good” and “bad” or what falls into conventional forms and narratives. I hope the book opens up these questions and helps readers begin to formulate their own answers.

Kay E. Bancroft (they/them) is a queer non-binary poet, educator, editor, and reviewer from Cincinnati, OH. They hold a BA from the University of Cincinnati and are currently an MFA Candidate at Randolph College. You can find their writing in Cotton Xenomorph, Longleaf Review, The Rumpus, and more. Explore their work at kayebancroftpoet.com

“When the rest of the world says no”: An Interview with Beth Kephart

"Embracing time and space": An Interview with Ryleigh Wann