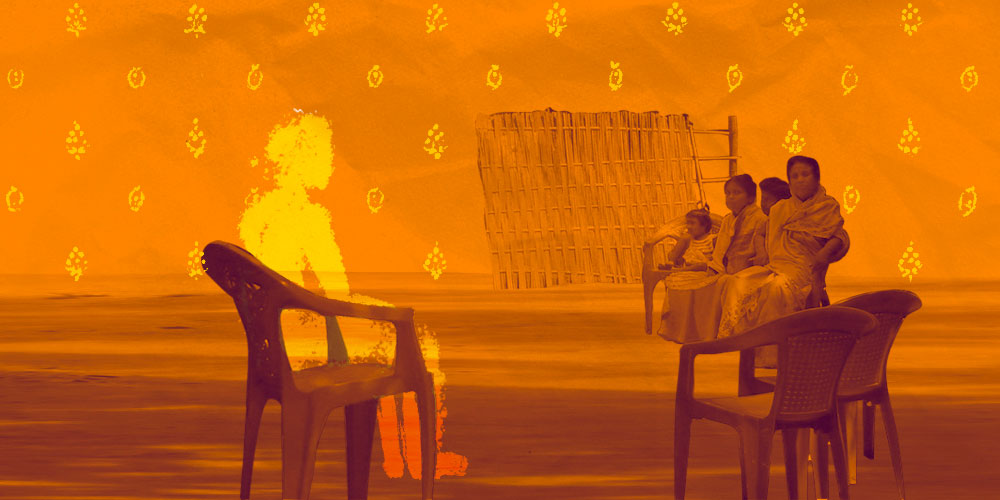 Note: This piece contains mentions of death and dead bodies.

terrible misdocumentation has happened. total blasphemous un-uniform distribution of statistics on my computer screen. fifteen quadrilaterals. all rectangles, some squares. a collage of casualties in colour. death by chocolate. sorry, suicide.

the first news report reports the government’s apathy. the second just says “citizen.” they are from the same time. i was safe. both times.

what is the citizenship status of the corpse?

everyone lies but especially these reporters

the third image displays the puffed face of my friend’s mother, her lover on the side. they hung themselves 500 metres apart on a video call, drowning in the sound of the brahmaputra. tragic, really. not shown — their suspension. the enraged petrified hangdog husband. i should probably text my friend. although i might be three years too late. a few more photographs: pendent legs / I quit; smoke on helmets / the aftermath of fire; wrist / bloodlessness. iceglass faces, presumably of children. separately, a blurred teen. some young singer in a yellow mekhela, performing on a বিহু মঞ্চ. a couple paintings. watercolour, i suppose. another random headline accompanied by bhupen hazarika’s face with someone who looks like my dad’s dead best friend. turns out my father and i have something in common after all. who would have thought haha. i must not digress. this poem is not about them. i’m not interested in their passing. don’t sulk. here, look closely. the search bar says <your name><cause of death><place of death><year of death> but fifteen quadrilaterals, all rectangles, some squares later, not one of them reports you.

Shlagha Borah (she/her) is a poet from Assam, India. Her work is found or forthcoming in Rogue Agent, long con magazine, Ninety Seven Poems (Terribly Tiny Tales & Penguin), LiveWire, and elsewhere. She works as Associate Poetry Editor at Doubleback Review and as Poetry Reader at Frontier Poetry and Grist. She is the co-founder of Pink Freud, a student-led collective working towards making mental health accessible in India. Please consider supporting her work at BuyMeACoffee.com/shlaghab.

Learning to Drive: A Fat Abecedarian