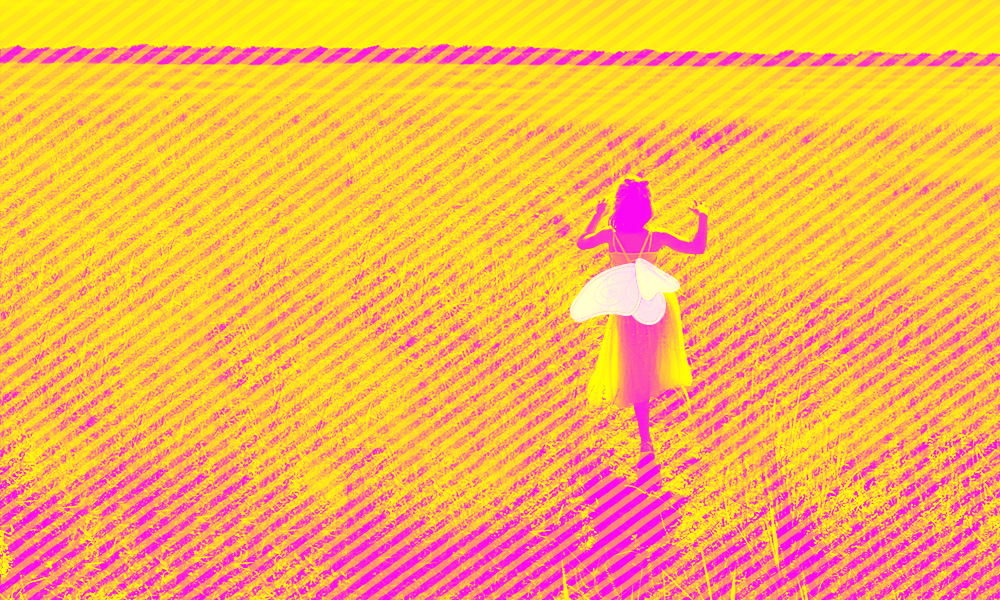 I can’t see fairies like everyone else. Catherine points to them hiding in the rafters of the gym when our group of three is supposed to be outside at recess with the other first graders. “Look, look!” She’ll shout. “She’s right up there!” She describes the fairy’s blue dress and her blonde hair and her tiny blue wings. Maddie looks where she’s pointing and backs up Catherine’s story. Sometimes I think I know what they’re talking about. Most of the time I don’t.

The fairies come to Maddie’s house at night. When I go to her house to play, she tells me they’re too shy right now, but they’ll show up after I leave. She’s baked little sugar cookies for them, and she leaves her window open so they can come to her room when her mom thinks she’s asleep. They’ll give her some fairydust and she’ll shrink to the size of a pencil and grow a pair of delicate wings. Of course, flying was difficult for her at first, but she’s better at it now. Maybe she’ll show me once she masters the art completely.

When I ask to stay, she tells me not tonight. Next time. When I come back, I can sleep over and we can turn into fairies together. I’ll go with her into the top branches of the elm tree in her backyard. I’ll meet all the fairies, and we’ll have tiny tea parties and I’ll wear tiny dresses and use my tiny wings to fly. But not yet. Now’s not a good time.

They visit Catherine at night too, but she has screens on her windows, so they don’t come inside. The logistics of fairy visitation don’t seem to bother her too much, though, because she can see the fairies during the day. With her, I build gardens for the fairies with painted rocks for them to sit on and beds made of leaves and tree bark. But no matter how long I leave them outside, I return to find the gardens untouched.

By the time summer begins, we’re talking less about fairies. I don’t see Maddie and Catherine as often, and when I do, we’re playing with dolls or running around outside or making up recipes in my kitchen using only sugar, water, and chocolate milk. Our new activities strike me as slightly odd. I know that if I had the gifts that they had, if I had been chosen by the fairies to be privy to an entire universe of secret gardens and delicate wings and hidden worlds inside tree trunks, I would never talk of anything else.

I give up on the notion that my friends are going to be the key to becoming a fairy and decide to strike out on my own. Buried between painting supplies in my basement, I find a bottle of industrial-sized craft glitter. Something this silver and sparkly must have magical properties. I worm my way into the back of my closet and sit on the ground, hunched beneath my clothes and on top of my shoes. Carefully, I open the glitter and pour a pinch into my palm. I squeeze my eyes tight and toss it over my head.

I open my eyes, and I’m still cramped in the dark corner. I touch my back. Sharp shoulder blades stick out where my wings should be. The only logical explanation is that I didn’t use enough glitter, so in a flourishing motion, I toss more above my head. Again, nothing happens.

Maybe the fairydust isn’t meant only for topical application. After all, there’s nothing on the bottle that indicates how you’re supposed to use it to turn into a fairy. It must be a well-kept secret in the glitter industry. I pour some directly into my mouth.

Maddie never told me quite how un-magical glitter tastes. It makes me cough, but my body still feels the same. In a last-ditch effort before my official surrender for the afternoon, I empty the bottle by rubbing it on all uncovered surfaces of my body. It doesn’t stick as much as I want it to, so I increase the amount and watch as glitter falls and embeds itself deep within the carpet.

If it had given me wings, I wouldn’t be in as much trouble as I am. Glitter wouldn’t be eternally banned from my household. But unfortunately, I’m still human.

Failure on the glitter front, fine. Maybe I can still prove my desire to meet the fairies another way. I do some research, re-reading the books on my shelves that have always provided me with objective truths about the inner workings of the fairy community. Ignoring the textual inconsistencies between different authors, I settle on adhering to the fairy diet that I read in one of the books. I’m supposed to eat the yellow tufts of dandelions and drink the dandelion milk that can be extracted from the stems.

I find myself in a sea of dandelions soon enough. My family drives from our city home to a cabin deep in the mountains, where we’re surrounded by aspen trees and undulating hills and snow-capped peaks. Here, I set to following the strict fairy diet for an entire morning. Meticulously, I trim dozens of dandelions and separate their flowers and stems. The yellow flower feels dry and is almost as bitter as the dandelion milk, which leaves a taste in my mouth even after I give up on the diet. Not since my first sip of buttermilk have I experienced such a profound milk-based disappointment. Fairies must not have as much of a sweet tooth as I thought.

While outdoors by myself, I whisper to see if they’re hiding in the bushes around me. Catherine had told me that since they’re so shy, they like to visit the most when she’s completely alone. I have no reason to doubt that. I write letters to them, promising to keep their secret if they show themselves to me just once. Or if they let me have a pair of wings just for a single afternoon. I bargain with them to join me as I look for flat rocks to use as skipping stones in the spring outside the cabin. At night, I count shooting stars outside and beg them to grant my fairy wishes. I watch the Milky Way dimly light the outline of the mysterious terrain around me. I might not have the right magic myself, but I trust that I’m in its presence.

Zoe Baumgartner is a journalism and political science student at Northeastern University from Denver, Colorado. “The Right Magic” is her first published work.

Ending in Laughter: On Grief & Trauma

The Florida Museum of Natural History