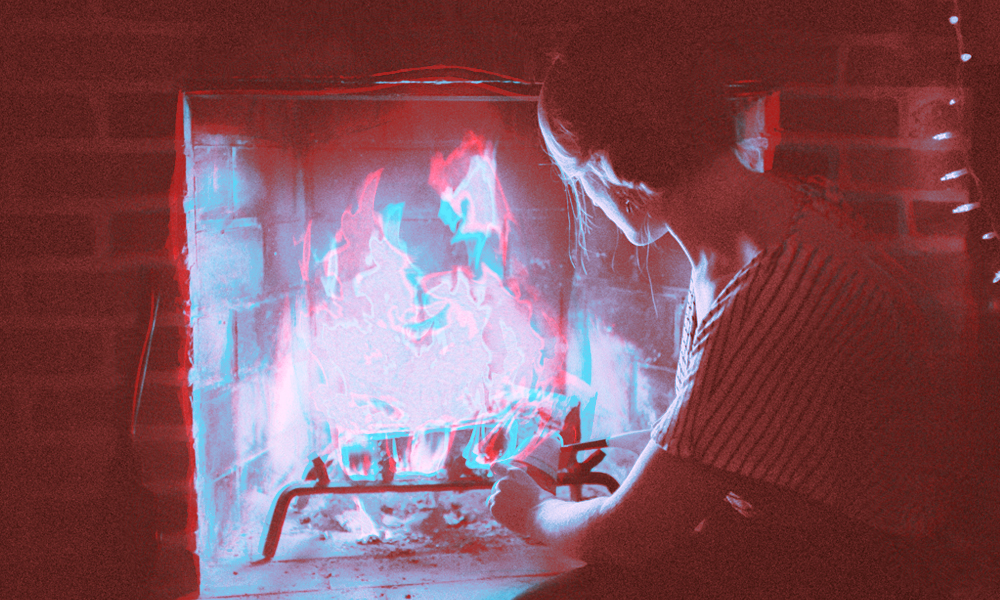 When, after the winter storm howled and it had been two days without heat and power — our shoulders slumped beneath the weight of puffed coats and ragged blankets, our fingers brittle inside their gloves, our thoughts frazil icing inside our skulls — we imagined a harvest of heat inside the fireplace. If we could find dry sticks. We did. If we were willing to burn the news. We were. If red phosphorous might be converted into white with the flick of a match. It was.

The fire, then: orange-red, orange-yellow, orange-blue, just blue. Colors like threadbare sheets pinned to a line, and blowing.

We huddled as close as we could to the hearth without risking ash in our lashes, soot in our nostrils, smoke in our lungs. Inside our coats, inside our blankets, down on the floor beside each other. I closed my eyes and my husband closed his eyes and we drifted to sleep, eased, grew unaware of the world and the carbon monoxide cloud now drifting in above us. It might have been like that — two middle-aged lovers, a writer and an artist, found days later in a Tudor-style house choked through with toxins. It wasn’t our turn. My inert self, perpetually tuned to trouble, never finally restful, roused. I shook my husband until he opened his eyes, and we threw off the blankets and ran, jamming open every window until the frigid air we had sought rescue from became the only rescue.

When, months later, a fireplace expert ratcheted up the costs of repairing what had become, invisibly, a crumbled chimney, we said no. It was too much to spend, and so we concussed the charred stone and brick into fashion — arranging stoneware and metal within its maw and treasure on its mantel. On sleepless winter nights, I’d lie on the living room couch and stare into the dark toward where a flame might be, imagining slender sleeves of color, imagining a crackle.

This house is small, and through all those pandemic months of staying put it began to lose its seductions. The sun still moved across the windows and speared the rooms with light. The ivy still lowered its green Rapunzel leaves to the floor from the basket on the sill. A bottle of vanilla, left without its cap, remained suggestive.

And yet: The wooden floors had been belabored by our travels. The distance between the two rooms upstairs and the five rooms downstairs remained fourteen painted steps fuzzed out by lint and dust, daily ephemera. The paintings stayed in their places on the walls, the pantry hardly varied, the distance to the battered deck on the house’s southern side remained two broken doors and one broken lock, so that, by and large, save for the gathering of herbs or occasional grilling, the deck was unimagined.

And yet: The air itself is rescue.

It is autumn, not yet winter. It is the pine trees shaking loose their golden shag of needles. It is the peeling of the birch tree and the overgrowth of bushes and the browning of the super bells and the canopy of the two maple trees above the deck where, at night, in the dark, a writer and an artist, blanketed with coats, now come to sit and watch the moon rising high and then much higher.

If they find words to say, they say them. If they have wine to drink, they drink it. If they do not know, because they’ll never know, what is next and when their time is, it doesn’t, in these moments, matter.

For there is heat at their feet in a metal bowl of fire. There are flames licking pumice. Orange-red, orange-yellow, orange-blue, just blue. Colors like threadbare sheets pinned to a line, into memory, and blowing.

Beth Kephart is a writer, teacher, and book artist. Her new books are Wife | Daughter | Self: A Memoir in Essays and We Are the Words: The Master Memoir Class. More at bethkephartbooks.com.