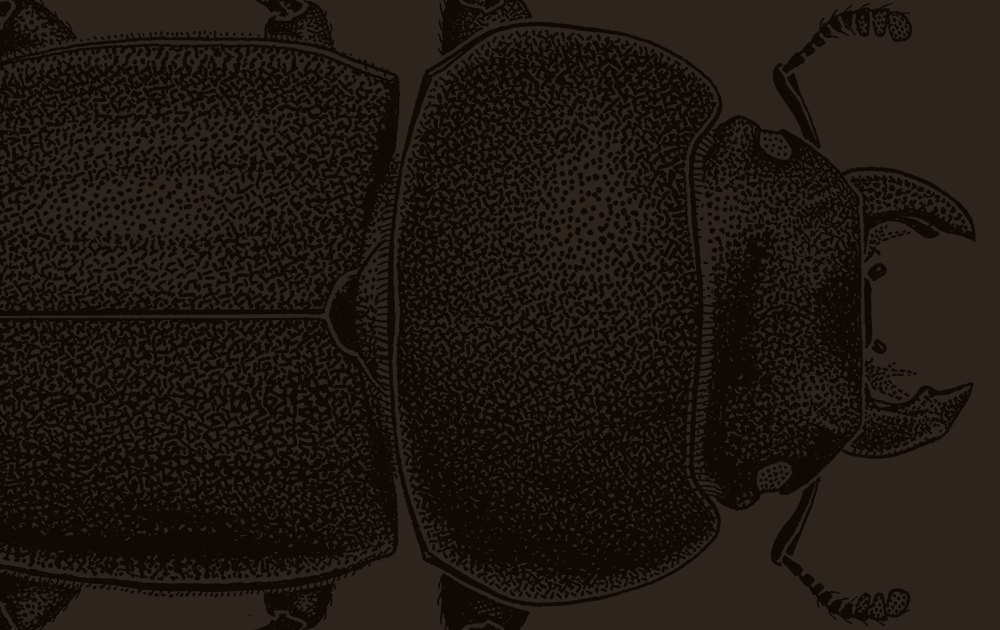 The grass creases on his cheek when he rolled over kept me from waking him. A clump of clippings at his zygomatic bone. God knows what burrowing near his neck, near the occipital bone, along the base of his skull, where I’d held him. Soft spots no one thinks on. I like paying attention to places on a body most people take for granted. A smear of my lipstick (color, Medieval) true to its claim, everlasting on his Adam’s apple—that sweet hunk of thyroid cartilage named for sin. His hair fallen across his eyes, still closed, still twitching like the horned beetle I’d picked off the dead pine next to our tent. I’d read in biology how when you see them, rarely anytime but dusk, they’re only ever searching for their lovers or fighting—other males, only males, of course always fighting—for decaying fruit or sap, favored mating grounds close to rotten wood. The sleeping boy is too sweet for fighting. He writes songs about my hair. The sleeping boy’s brother will find out about us alone in the old growth, our chapped skin, our damaged tent, and helplessly hope our similar smells are his imagination gone dark. I found no female, but the beetle’s hiss and mandible impressed me, a dribble of my own saliva as I pet his head, fighting the urge to tie a string around his dorsal plate and wear him as an amulet. Later, I will want to tell the sleeping boy’s brother how lizards and snakes and beetles of the family Lucanidae have vast variations in size between juvenilia and adulthood, how their bodies are bound to environment with only a smidge of genetic influence, but all I can explain before he slams the door is how females have smaller, more powerful jaws. When I drive away, I will say mandible out loud to an empty car and roll all the windows down, praying for rain, praying for wings, praying for horns of my own.

Beth Gilstrap is the author of I Am Barbarella: Stories (2015) from Twelve Winters Press and No Man’s Wild Laura (2016) from Hyacinth Girl Press. She serves as Fiction Editor over at Little Fiction | Big Truths. Her work has been selected as Longform.org’s Fiction Pick of the Week, nominated for storySouth’s Million Writers Award, Best of the Net, and The Pushcart Prize. Her work has appeared in Re:AL, Queen Mob’s Teahouse, The Minnesota Review, Hot Metal Bridge, and Little Patuxent Review, among others.