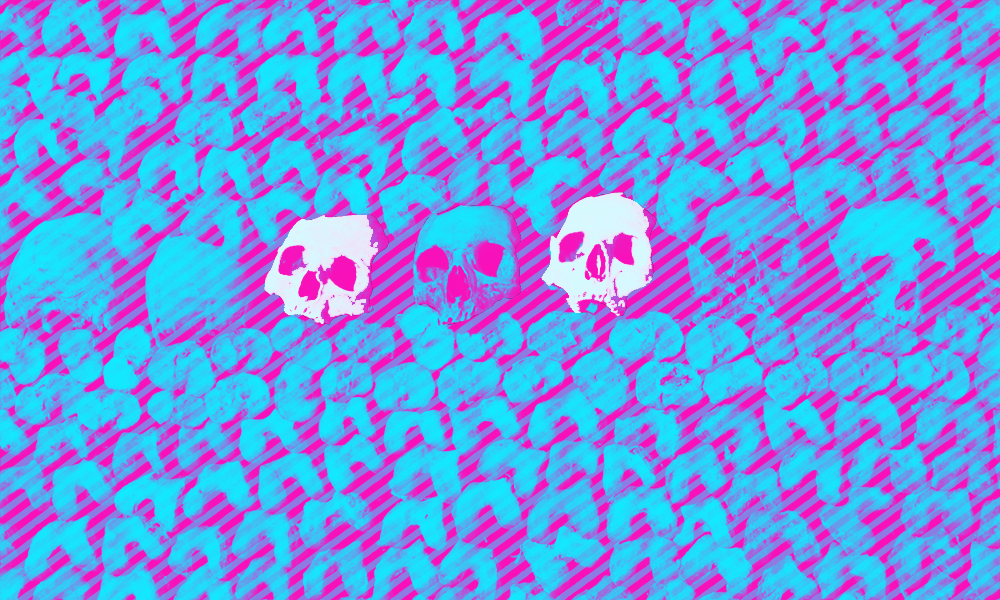 I’m always cold when I wake up in the bone house. The bedroom is in the back, out of sight. Its walls are so thin that they rattle with each shift of the wind. In the winter, I can see the first breath I take each day. In, out: a sly fog hovering overhead. This room is unfinished, my winter breath reminds me.

“Why don’t you just make the front room your bedroom?” my now-husband had asked on his first visit, back before he was my husband or my boyfriend or even a particularly close friend. “I never feel a breeze up there.”

“Too close to the street,” I’d replied. “That room is meant for entertaining. That’s not where I’m supposed to sleep.”

I’m lucky to have had enough bones in my possession to make that back room. When I started building just a few years ago, fresh off my mother’s funeral and getting ready to begin my life, I wasn’t sure that I would. Everyone knows when you build a bone house that you start with the front. First, the parts that everyone will see: the porch, the steps, the window frames, the eaves. Then the living room, bone by bone, layer upon layer, walls nice and sturdy. You cover up the bones with Sheetrock and drywall, pasted on by your own hands, and you step back, admiring. You fill it with heat and fluffy chairs and perhaps a plant, and people forget where they are. I would never have known that was a bone house, they say later.

Of course, you need a kitchen and a bathroom: equipment for living. You can start small there, if you don’t have enough bones left to make it pretty. A few whole ribs; a bit of skull; that’s all you really need. Mix them with the paint and the plaster and glue; you’re not supposed to see the bones anyway. You can upgrade later on, when more bones come. They usually do, if you’ve got family with any left to give.

I’ve always been proud of the bedroom in the back. It has perfect corners and tall ceilings, to match the living room in the front. I didn’t have enough to insulate the walls, so I got creative with the dregs of bone dust I had left and made crown moldings. When I finished, I set up my bed frame and made do. I hung a painting from the wall, next to a window swathed in gauzy white curtains. It was summer; the breeze was sweet. The crickets outside sounded like they were right next to me. As I fell asleep, I could imagine that I lay under the stars.

My husband was happy to move in with me when we got married, just two years after I finished my build. He’d been a lifelong renter until then. He’s never had any bones of his own—not even from a spinster great aunt who everyone forgot about—and he certainly couldn’t afford to just buy an existing house. Most of them are made of bones anyway. Their owners have just forgotten.

“It feels different to know where the house comes from,” he always says, patting the walls. “It’s safer, like living with family.” And we are: the living room and kitchen come from my parents and grandparents, and the rest from their parents before them, from the crumbling walls of their own bone house. My sister and cousins took some too—by law, we had to share.

That bedroom, though: it bothers him. At first he pretended like it didn’t. It was summer when we wed, and he could focus on the coolness of the nights and the openness of the season around us. When the weather turned for autumn, he began piling on blankets, more and more as the months wound on. He stayed up in the insulated living room later and later. By February, I could barely see him for all the covers he slept in.

Now it’s our second winter together here. I catch him frowning as he gets ready for bed, layering up pajamas, unfolding blankets. In the moonlight that peeks through our windows, when he thinks I am asleep, I see him raise his hands and stare at the bones of his fingers and wrists. I see him think: I have some bones of my own we can use. Some folks do that: get somebody to carve out their bones early, fingers and toes and more, if they’re desperate. I might as well get to enjoy them while I’m alive, they say. It’s a terrible mistake. They might be able to fix up their houses, but they’ll never walk or eat or run the same way again.

“Wouldn’t it be nice,” my husband muses, over mulled wine in our cozy living room one night. Old jazz from the record player softly mixes with the crackling flames in the fireplace. “Wouldn’t it be nice if we could have another room back there, by the bedroom? We could put in another fireplace. A bookshelf, with a ladder.”

“I’ve used up all my bones, for now,” I point out. “And your family is still living.” He scowls.

“Maybe there is something else we can do,” he says, looking down at his hands.

“Don’t do anything foolish,” I warn. I’m thinking of him going after his own bones, but I suppose there are the other things too. Plenty of folks go that way. Why should he get to keep them if they’ll never get used? they say. What’s the point of someone walking around with perfectly good bones that will just go to waste? You’ll never get a good night’s sleep if you build your bone house like that. Not least because the law will come after you—someone has to specifically say you can have their bones if you’re not in their bloodline, and murder, of course, is against the law.

One day, a box arrives, heavy and tied with a thick black string. It’s for my husband. He wasn’t expecting it, but before he even opens it, I know exactly what it is. Inside: a big pile of dusty white bones, broken already into tiny pieces, perfect for building. The official letter says they’re from his father. They haven’t spoken in years.

I wait a few weeks before I ask him what he wants to do. “We could finally insulate the bedroom,” I suggest, in what I hope is a gentle voice.

“But you hate the cold,” I remind him.

“Not as much as I want more space,” he says.

So that’s what we do. They’re his bones, after all; who am I to tell him how to use them? We build the room with walls just as high as the bedroom, though not as wide. These walls end up a bit thicker; my father-in-law must have been a tall guy. There is even enough left over to add a set of built-in shelves. “It turned out nice,” I say, after we lay down a weighty woven rug in front of the new fireplace. A desk is on order; it will arrive in a few weeks. In the meantime, we fill the shelves with books from our childhood, which formerly resided in overflow piles on the living room floor. It’s not much trouble to acquire possessions; the issue is having somewhere to put them all once you do.

“I hate it,” my husband says. His face is wrought into something ugly: a monument to disgust. “Once I had a father. Now I have bookshelves.”

“Once I had a family,” I counter. “Now I have a house. That’s just life. They did the same, and so will we.” I’d rather have my grandma than those gleaming countertops. She made me chocolate cake for my birthdays.

My husband does not go into our new room. Even when the desk comes, all finely carved out of richly oiled dark wood, he stays away. He piles on the blankets at night in our freezing bedroom and sleeps with his back to me. On the nights I join him in front of the fire in the front of the house, he looks at me with dread.

“If I die before you,” he asks, “will you make me into part of your bone house?”

I carefully arrange horror in my eyes. “Of course not,” I say. “I’d save your bones for our children.” We do not have children, nor is there room for them in our tiny bone house. Perhaps we will find a way, eventually, to make space for them. My husband still has family living.

If not, though, it will be all right. We have a lovely home: two fireplaces, fluffy chairs, even bookshelves with a ladder. When time comes for my husband, I’ll take his bones, as is my right, and finally finish the bedroom. Old age alone in my bone house will be lonely, but at least I’ll wake up warm every morning, right until someone comes along to make me into a bone house too.

Caelyn Cobb is a university press editor living in Queens, NY. Her work has appeared in The Dream Journal, Analecta, and many places on the internet. You can follow her on Twitter at @caelyncobb.

Something Unseen Building: An Interview with Kelsey Ipsen