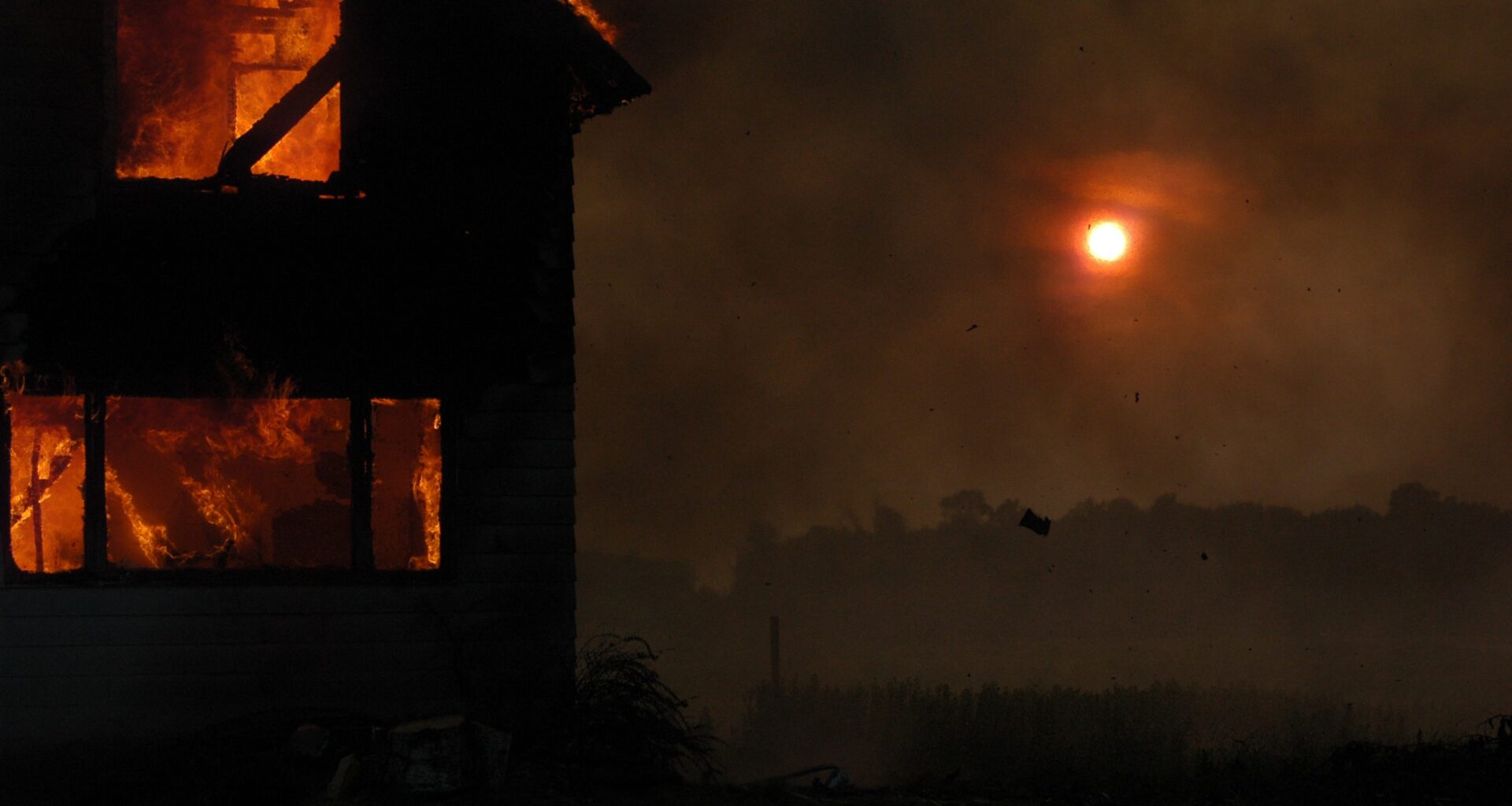 We eat cold cobs of corn at eleven p.m., and that’s dinner. We swallow glasses of chilled water, the ice cubes liquifying quickly, beads of moisture dampening our palms. Minutes later, we can still feel a ribbon of cool down the backs of our throats where the water touched it. Sweat gathers above our lips and beneath our hair. There’s nothing quite so sinister as a hot wind on a California night.

We hear it throttle past outdoors, while indoors we do not stir. We are draped in heat, unable to move, unable to sleep. The air weighs on our skin. We sit like stones.

And it is not a languid, passionate heat, the swelter of an afternoon balmy with tennis, or sex, or sunbathing. No, this is a menacing heat. It is the kind of heat that brings the fires, vast and raging.

It’s the worst in August. On nights like these, the flight of a single spark can bring acres of destruction, nurtured by parched air. The fires start in the mountains before they work their way down to the town. They travel quickly too, devouring field and forest indiscriminately. The wind ushers them in, its cruel fanfare beating at our doors and rooftops, our lightbulbs flickering like a heartbeat. Nobody speaks at home, tongues swollen with fever and fear. One by one, our lights go out, as if darkness will bring relief.

The first siren blares. The town draws its breath as others join in—two sirens, three, four—their choir of wails counter and overlap like jazz rounds. When their shrieks fade, the silence rings: Another Emergency.

We know exactly what to do. Slowly, carefully, so as not to tempt fate, we start to amass photo albums, diaries, and passports. A bag of granola bars and a change of clothes slump next to the front door. Noise of the local news channel filters in from the living room, playing to empty armchairs. Cars sit parked in garages, gas tanks fueled and trunks packed with tax records, birth certificates, deeds, dog food, and heirloom jewelry. Some belongings start to matter less. Televisions, children’s toys, sets of dishes, book collections—these we leave behind. We nod to each other in grocery store aisles, stocking cans and boxes in case the roads close. We pick up dust masks made of paper and elastic, handed out free in malls and parking lots. We begin to greet our neighbors: Have they received any calls? Is it contained? Is it moving east? Has it reached the foothills? Are they planning to leave? There are always some who choose to leave, but people usually stay.

The real news reaches us in fragments of gossip. Houses in the northern mountains have started to go. Deer and coyotes are fleeing the woods. A classmate’s house is gone. An old teacher’s house is gone. A coworker’s backyard is burned, but the house itself is fine. Neighborhoods shift and merge, making room for a stream of evacuees. We rearrange. We leave out water for the animals. We pick up each other’s children from school, we bring over trays of lasagna, we make up guest rooms and couches with fresh pillows and sheets. Homes open wide.

The heat never budges. It remains heavy, sticky on the town.

What else can we do, but watch with dread as the winds flare once more, their might whipping through us, coming for our town with a vengeance. What else can we do but wring our hands in front of the television, praying the blaze never reaches us. We have so little power. We have so much to lose. We can only brace.

Every year, months after the flames have died down, we will drive through neighborhoods where the fires did reach. Blackened skeletons of homes will remain, now chunks of wall and window frames, their foundations barely intact. We’ll be able to tell where the living room had been, sometimes the kitchen. The rubble of the chimney always survives, its base defiantly still stuck in the ground, now smokeless.

One house had to burn so the others could be kept safe, the firefighters will say. One house was already going under, and they had to buy time. One house was not worth saving. We’ll avert our eyes from this scorched obelisk of white-painted brick, reminding ourselves firefighters know best. FOR SALE signs will pepper this lot, the family’s life begun again elsewhere. The homes that were saved will seem to bow a little in humility. It could have been them.

From the mountains to the ocean, we are all the while wrapped in a sickly yellow-gray haze. It locks in the blistering, grimy air that gags us. A layer of ash coats the town, the charred bits fluttering from the sky like a dusting of snow. Lawns, sidewalks, and pools turn gray. We try to joke. What will be next—locusts? Our throats clog, our eyes sting. We wear our dust masks. We close our windows. In the distance, the hills loom either black—scorched, or worse, red—aflame. The ocean churns a nauseous shade of mud, while above, the sky glows a pallid green. We also close our blinds. It is too unbearable to look out.

And still the heat creeps in. Like a villain, it slips up through the pipes and under the cracks below our doors. More insidious than the fires that roar or the wind that cackles, the heat simply seeps, saturates, pitiless and unyielding. We recoil as it swirls in, groaning, kicking off sheets, tossing and turning in an attempt to fight it off.

But the heat always wins.

So we have learned not to fight. Instead, we dim our lights and sip our water. We turn off the news channel, and we try to drown out the sirens. Friends hug goodbye a moment longer. Parents allow children to sleep in their beds. We kiss one another goodnight, calm and resigned, and we leave the photo album by the door.

Clara Hillis is an undergraduate student at New York University, studying Global Liberal Studies and Italian. She has published work in both English and Italian in Brio. literary journal and the Santa Barbara Independent. When she's not writing, she loves to dance, cook, and go to flea markets.

I Brought You Back an Armadillo