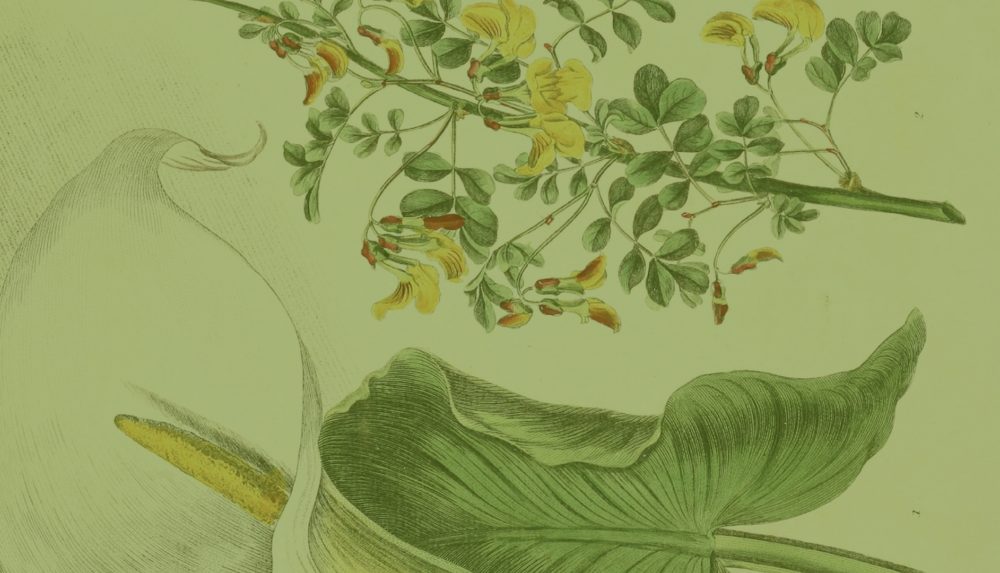 Margaret’s bed faced the big bay window in the living room. Heavy rain in the night had swept the cornflowers low. They bowed on either side of the brick walkway, their wet blooms painting her sister’s ankles. Nia didn’t seem to notice.

Oh, how she’d envied those beautiful ankles! Until recently, her sturdy legs had met anchoring feet without warning, ankles indistinguishable. She had always preferred to project rootedness and strength rather than grace when circumstances forced her to choose, but just once or twice it would have been pleasing to think her body called to mind a gazelle or the faint strains of a Viennese waltz drifting across the Danube at night. Now, of course, anyone who cared to look under the sheet would find each bone of her ankle exquisitely distinct, covered by a mere whitewash of skin.

Nia’s key turned in the lock, and Margaret tried to shift upward. Each knob of her spine rasped against cotton. She fell back, quite still.

“I’m awake,” she said as Nia squinted toward the bed, her arms full of hateful rot-sweet lilies.

Nia swept into the kitchen for a vase. “You should be resting,” she called.

Grimacing, she waited for Nia to return before replying; she couldn’t project her voice over the water or the rap of her heels on the floor. Resisting the impulse to remind her sister that she hadn’t been able to leave the bed unassisted for months, she said, “I wasn’t expecting you until the send-off tomorrow.”

“Meeting was canceled, so I don’t need to be in the office for an hour. How did the night go?”

It must be exhausting, Margaret thought, hiding the effort of ceaselessly anticipating problems and evaluating solutions, but when she sat down in the big chair squashed in the corner—the lilies, mercifully, left in the dining room—Nia didn’t allow her back to brush the threadbare velvet.

A little late, Margaret remembered that she should answer the question. “Uneventful.”

Nia’s customary neutral expression—she was an attorney, a good one—replaced relief so quickly that Margaret almost missed it. She’d told a half-truth; the nurse’s reports, which she suspected Nia read, would be dull. Routine maintenance. But when Margaret slept—if the drugs were working well she slept an hour or two at a time, three at most—she was pulled under into silent dreams so fantastic that when she woke the world seemed glazed with their after-images, furred jellyfish and golden whales circling lampshades, tomatoes the size of tires vining the walls, the magnolia in the front yard shimmering in the heat, its boughs heavy with twinkling prisms casting reflections of faces she missed onto the grass. Her parents, her grandma Vivian, Eliza and Aunt May, Nat—

Her expression must have twisted. “Should I adjust the drip?” Nia asked.

“No, it’s another hour or so until the next dose.”

“Is there any chance you might change your mind about tomorrow?”

Margaret caught herself about to shake her head, which would have sent swells of pain through her skull. “No,” she said instead. It didn’t come out as confidently as she intended, but maybe Nia was willing to be convinced.

“What about this seems natural to you?” said Margaret, her eyes roving over the tubing, the sentinel machines, her bed where the sofa ought to have been. She felt like a distorted version of a monarch in a throne room, receiving ambassadors from the realms of the living.

Nia uncrossed her slim ankles and got up, slamming her palm against a fly on the window. The sound ricocheted through the room, burrowed into Margaret’s ears. “I guess I’m being selfish,” Nia said, plucking up the body with a tissue.

“We all are, when it comes to love.” Forty years ago she and Flor had chosen each other, knowing full well what their choice meant for Nat, and still the ache of the rupture persisted. She pushed away the thought, and the question that followed, trying to focus on her sister here and now. “I’ll miss you too. If I can, I mean.”

Nia nearly raised the tissue to her eye, but remembered at the last second what was inside. She coughed once and sat back down.

“Give me something to do before I go.”

“Everything’s ready. Flor will be back soon, and Dawn and Binah are coming over later. Abe left a message too.” Pulling the names from her memory took almost physical force. “And the nurse is here.”

The last addition was deliberate, and as she expected, Nia seized the chance to be mildly affronted. “I wish you had let me hire a premium nurse. I’d feel better with a person always in the house.”

Margaret waved her left hand, a singular little territory without pain or ports. “Irrelevant now. And the nurse has been perfectly adequate and economical.” Besides, she admitted privately, there was more dignity in letting a glorified microwave attend to dressing and bathing and other indignities rather than a human being equipped with disgust and sublimated fear.

But much as she hated to be a burden, she knew that for her sister, the burden was sitting and watching her and wondering how long it would be until someone else she loved slipped away. “Maybe you could check in with the caterer,” she relented. “I’m worried that we under-ordered champagne. And for god’s sake, remind them: no fennel. I hate fennel. And tell the band again that I don’t want people shouting to be heard over the amplifiers.”

Mollified, Nia settled back in the chair, softly dictating reminders to her phone. When her face relaxed the sixteen-year gulf that separated them narrowed to a strait. The image plucked at Margaret’s memory; she’d been spending hours dredging up her oldest recollections, searching for details to direct her attention away from pain, and now they floated on her mind’s surface, like water lilies. Sometimes she thought their spreading, tender leaves would suffocate the life underneath. But she was so tired it hardly mattered.

In this memory, she was six, or maybe seven. A Maine morning, sea and sky muddled gray. She’d picked her way from the beach to a small piney island across a stretch of seafloor low tide had left bare. With her fists full of blue-black shells that pricked her skin, she’d turned back to see where she’d come from, and felt sudden lightness, utterly convinced she’d never need to travel back to that shore again, that she could rest on a bed of soft brown pine needles, wrapped in shadows that tasted like salt.

Then her grandmother’s voice skipped like a stone across the cove, calling her back to that hot scrape of sand. Later she held bits of string over the shells while her grandmother filled them with shallow pools of hot wax. They melted broken bits of crayon and swirled the tops of the tiny candles with sea creatures. She’d saved one, somewhere. Tomorrow—her last tomorrow—she’d find it.

Something brushed against her attention, some inchoate sense that she’d softened the edges to make the images more tolerable. She’d left someone behind on the shore.

Margaret opened her eyes, confused by the scent of the lilies, all wrong. How long had she been drifting? Nia was talking, something about her books—no, she’d already decided about the books, Nia knew that—dust, she was saying they should dust the bookshelves. She was perched on the arm of the chair, pulling something from the back corner of the shelf, where Margaret kept her grandmother’s three-volume Montaigne. She clutched at the fact of the books, their ochre covers and deckle edges and gentle mildewed smell. She was still here.

Nia’s voice was a weak light cutting through the fog. “Maybe Joe and the girls should dust when they come over tomorrow. They’re going to come early to supervise, so I can just sit and talk with you or wrangle guests or whatever you need, okay?”

Her sister’s spontaneous visit, the question Margaret had been putting off, the second figure she’d removed from the island—all slipped into focus.

“Nia. You told me these plans already. Last week.”

“I know, but they say that short-term memory goes—”

“Mine hasn’t.” She mustered all her older-sister authority. “You’re dancing around some bad news, counselor. Spit it out.”

Nia circled to the left side of the bed and sat down on the floor. Summers when they were younger, she used to sit like this, head against the mattress, long legs stretched out, rambling through bits of news and jokes while Margaret laid out her suitcases on the bed, packing to go back to college or graduate school. Even back then, she was fitting herself along the contours of her elder sister’s separate life.

Margaret ran her hand over Nia’s hair, still soft, now impeccably highlighted. How much labor went into being a woman, she reflected. How much more for Nia, too. By her sister’s age, Margaret had been working from home for decades; she slipped easily into the invisibility expected of older women. Nia couldn’t. Or wouldn’t, maybe. Margaret found it hard to tell, and was ashamed she didn’t know her sister’s mind the way she knew—

Nia caught her hand and pressed it lightly, tracing her knuckles with the barest touch of her fingertips. “I talked to Nathaniel,” she said. Their brother’s name unfurled between them, a banner for a lost cause. “He’s not coming.”

So. Here was the answer to the question she’d dreaded to ask. For months Margaret thought she’d be prepared. Foolishness, foolishness; hadn’t eighty years of learning other lives taught her better? She had hurt him, true. But she’d convinced herself it was long enough ago, marriages and children and illnesses and deaths ago. He’d had his justice, left her to face this last shore alone. But justice wasn’t enough. We’re all selfish when it comes to love.

“Is he happy?” she asked after a minute.

Ignoring the pain, she nodded, determined to be satisfied.

A while later Nia stood up, kissed her, and left for work. She noticed the wet blue flowers along the walk this time, stepped over them with a dancer’s thoughtless elegance.

Margaret couldn’t make the nurse understand how she wanted the lilies disposed of. When she gave up, the nurse tossed them outside, where the wind blew them across the lawn. For the rest of the day Margaret watched from her bed as they crisped in the sun, until the anthers became licks of flame in little heaps of sand, until she tasted salt.

Carolyn Oliver’s writing has appeared or is forthcoming in The Greensboro Review, The South Carolina Review, Day One, Tin House’s Open Bar, Gulf Stream, Booth, and elsewhere. A graduate of The Ohio State University and Boston University, she lives in Massachusetts with her family. Links to more of her writing can be found at carolynoliver.net.

Melanoma: The Politics of My Skin