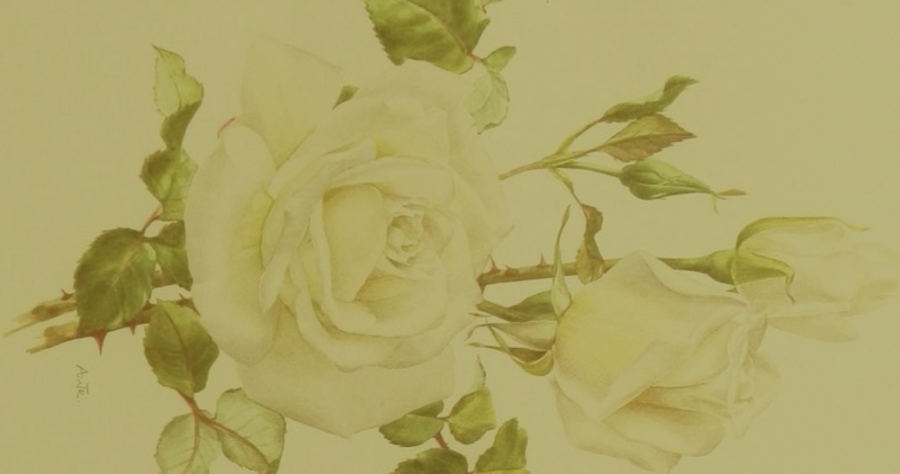 The flat smells of damp, furniture polish, and squeezed out teabags. Outside no-one lifts their head in case their noses freeze, here we’re smothered in fumes from the fake fire. The photo album is dry like carefully stored tinder, the dried rose petals haphazardly stuck on the front look yellowed and frail.

“Do you like roses?” she says, not looking at me.

That’s not how this usually goes. She’s challenging me, and I don’t have an answer. ‘No’ is too abrupt, ‘I don’t know’ sounds like a lie. A forty-five-year-old woman who has no opinion on roses. I have an opinion on everything. But this is not the place I speak.

Aunty Mala offers me milky tea, which I take, and besan ladoos, which I put down. Nirmit’s favourite, they stick to my gums like ash. She slumps down on the cotton-covered sofa. Her voice assumes the robotic enthusiastic tone of a cricket commentator.

“This is when you were 18 months. You’re in that cupboard, you worked out how to get to your food jars, then locked yourself in.”

This is the only photo of me my parents showed people, before Aunty rescued it. I don’t ask why my mother didn’t open the door before she took the photo.

“This is from when Nirmit won the butterfly stroke when he was 8.”

Look at how athletic he is, how strong. I can see goose-bumps on his skin as he smiles crookedly. Aunty Mala’s unwrinkled hand is giving him a towel.

“This is the chess competition, when he was sixteen. You remember, he didn’t expect to win, he hasn’t brushed his hair.”

Look at how good he must be at strategy, at planning ahead. It’s next to a creased, beige newspaper clipping from the Leicester Examiner, where his face is tiny and his hair has faded to smoky smudges.

“This is his first day at the fire-station. Do you remember Mrs Allen’s cat? He got covered in scratches.”

Look at his dedication, his kindness. His shoulders have broadened, legs are still skinny match-sticks.

We pass over the blank page, with sticky remnants of adhesive that gets under fingernails and takes weeks to scrub out. That picture of  Nirmit’s spotlessly clean Toyota Corolla that he used to keep in his wallet.

“That’s just before your violin concert.”

I’m standing next to him, with big shoes and bigger hair, but we never mention me. I’m the one that came back. I must have been the drain on his attention or the distraction that broke his concentration, found lying on the ground next to a tree 15 metres away, too shocked to speak. Then when I could, having nothing to say.

She stares at me for exactly five seconds, I put down my cold tea. I stopped taking sugar eleven years ago, but that’s not in the script.

“You always liked the front seat.”

Another new statement, but we should have finished now, the album is closed. She stores her feelings away, I take mine with me. I can’t produce anything for her while I’m tamping things down. She picks up my mug, the one I have every year. It’s chipped so I only drink from one side. I notice for the first time there are roses on the handle. Her cheekbones gleam in the half-light. This woman was my childhood refuge, her son like my brother. I stare into the glowing of a fire that’s not there.

There were white roses on the front seat, a present for his mother. I joked about priorities, and moved into the back. The branch that smashed the front window would have struck my forehead, dead-centre.

“It was an accident, I didn’t do anything wrong,” I say, voice stronger for the breath I’ve stopped holding.

“It was an accident,” she says, and reaches for my hand.

Anita Goveas is British-Asian, based in London, and fueled by strong coffee and paneer jalfrezi. She lurks in libraries and her local independent bookshop, Bookseller Crow. She was first published in the 2016 London Short Story Prize anthology, most recently in Pocket Change, Haverthorn, Moonchild Magazine, Riggwelter Press, Anti-Heroin Chic, former cactus mag and Litro. She tweets erratically @coffeeandpaneer

The Future Carries Us Forward to Winter