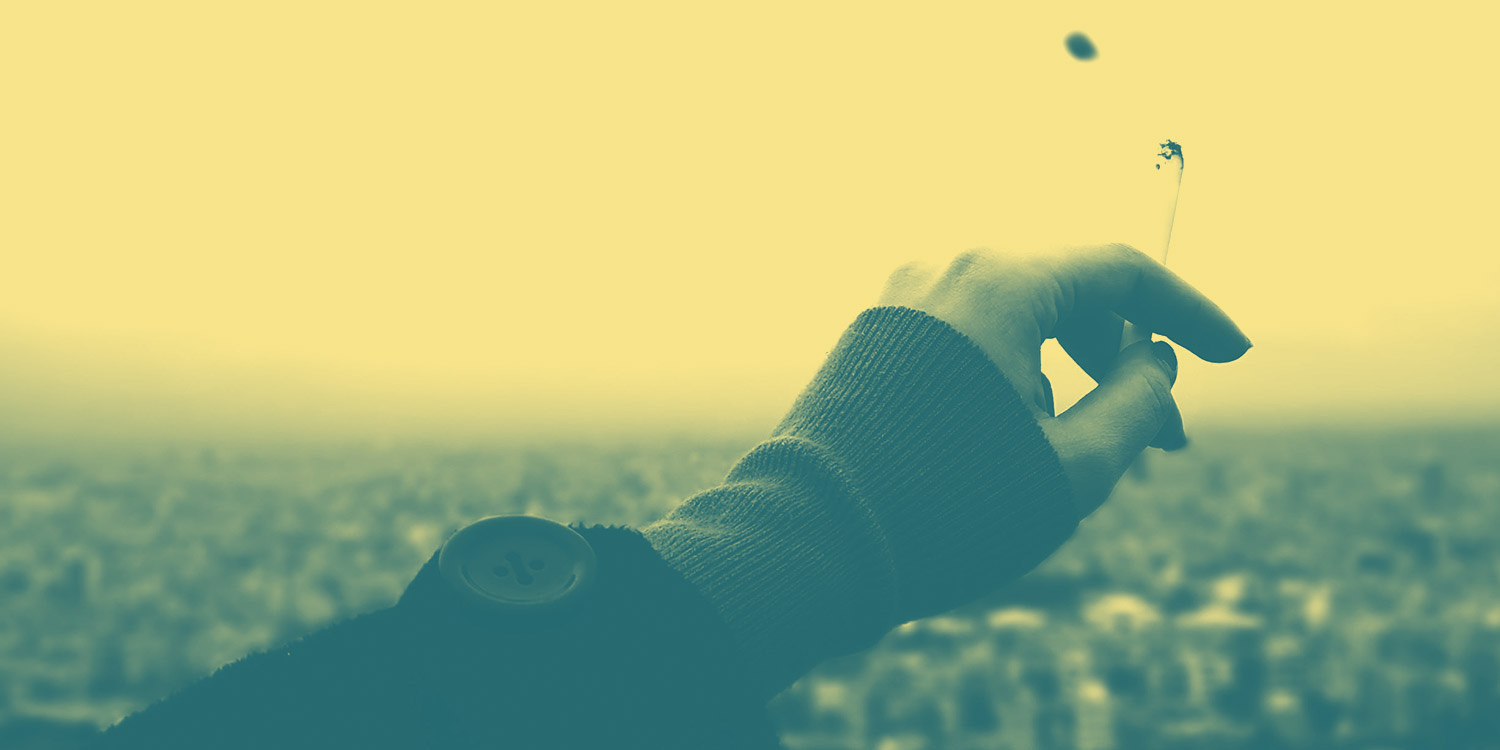 The girls climb down under the bridge. Below them, the river is dark and still, a surface so solid it almost doesn’t look like it could drown you. Dead leaves and firecracker casings litter the narrow ledge just beneath the metal beams. The girls brush a space clear with their jacket sleeves, then sit down close enough to touch.

One girl reels in the lighter hidden in a drawstring pouch around her neck, flicks open a flame, and drags a couple times before handing over the smoke. She knows the other girl won’t inhale, but she likes to let her hold it for a minute before taking it back. They do this until only ash is left. The girls have taught each other that sometimes kindness can mean doing a useless thing. They know that, at least for a little while, this can make you feel like no matter how you spend your life, it can never be a waste.

One girl grinds the smoke out on the ground while the other pulls a pair of iced teas from her backpack. The girls twist open the bottles and read under the caps:

‘Way’ is the most frequently used noun in the English language.

Every minute, you breathe in thirteen pints of air.

From under the bridge, the girls can look up towards their small town: a patchwork of old brick buildings and trees, the land sweeping up from the river to become hills all around. At their backs, the girls can sense the shadow of the mountain that rises like a roof opposite their town. Each year, their class climbs the mountain, one of the few still bearing an Indigenous name, which the boys in their class mispronounce on purpose, chanting want to stick it! till they reach the summit. The girls know the true Abenaki word warns against the confluence below: the water that will make you lose your way.

One girl winces slightly as she sips her tea. Somehow she ended up choosing two of the lemon kind the other girl prefers, neglecting a peach tea for herself. The girls have a habit of forgetting that they don’t always like the same things, that they aren’t actually the same person. It hurts a little when something reminds them, when each girl remembers she can’t always turn towards the other in order to know herself.

Sometimes the girls think they know this place better than they will ever know most people. They know, for example, that the bridge above them is named after the woman who founded the asylum at the north end of town. They know she had wanted the institution to be a refuge, but back then, doctors like her own husband believed that holding a patient for three to four minutes underwater might – if they survived – wake them into health. Those doctors insisted hard work was another cure and made the patients build a stone lookout tower on the hill. But after a number of patients jumped, the doors to the tower were locked.

Sometimes the girls still can’t help but wonder: did the water ever work?

One girl rummages in her backpack and pulls out a bottle of nail polish, a red so dark it is almost black. She flutters her fingers as if they are paper fans to make the other girl giggle and roll her eyes. They each paint over the other’s bitten nails – a small shapeshift, a vanishing act – they’ve never been able to decide.

The girls haven’t lived long enough yet to see much change around them, but they know it happens. They have heard that the bridge above them is the last one still in use on this stretch of the Connecticut, but that there used to be more. They have heard there are three just a little downstream, abandoned, one with just the piers still looming bare as tombstones from the water, another upstream ripped from shore in the Great Flood of ’36 and buried now somewhere at the bottom.

Sometimes the girls try to picture the lengths of all those bridges spanning the water. They can almost see them, marking the river like frets against a cascade of thrumming currents. They wish they knew what all of it meant – those old crossings, old binds.

And sometimes the girls wonder if they will ever arrive at the other lives they imagine waiting for them, patient and bright and clean like summer cottages far away. They worry that to get there, they will have to convince themselves there is nothing here to miss. Not the veins of light twisting through the water when the sun strikes a perfect angle. Not the cobwebs parachuting in the wind from every rusted beam. Not even the whistle of the train running parallel to the river, a silver needle cutting through green toward cities they have only ever seen on TV: Hartford, New Haven, New York, D.C.

The girls do not know that someday, a decade or two from now, they will still miss these things. They do not know that they will miss this day, the way they will miss more and more days the longer they live. But sometime in that future still to come, having seen those distant cities, having entered those other lives, the girls will discover that the old bridge taken by the river was found.

One girl will see the newspaper article among the clippings her mother always sends inside her birthday card. The other girl will flip through an alumni magazine and find a class note from a boy she used to know, a diver now with their hometown fire department. The girls will read about the rescue training, a sonar blip that looked like a shipwreck until the divers swam down. The girls will search online for the underwater footage, they will see the warped beams trailing weeds like farewell scarves through the current, and they will imagine there can never be a lost way. They will imagine you can remain part of another person forever the way a bridge almost no one else remembers can stay hidden beneath a river’s flowing weight. And if only you could fill your lungs with enough oxygen, you could swim all the way down to it, you could sit on one of the old beams gone soft with algae and rot, and tell all the fish and the stones what it was like once upon a time, till all your air runs out. And then you would have no choice but to surface again, a kettle whistle or telephone calling you back into the life that has become yours.

But for now the girls tip the last of the tea into their mouths. They stand and brush the dirt off their jeans. And then, lacing their hands together, their nails still tacky and whorled almost imperceptibly with the other’s fingerprints, they climb back up from the bridge.

Photo by Hesam Sameni on Unsplash

Erin Calabria grew up on the edge of a field in rural Western Massachusetts and currently lives in Magdeburg, Germany. She is a co-founding editor at Empty House Press, a small press publishing writing about home, place, and memory. Her work has been nominated for Best of the Net and the Pushcart Prize and was selected as a winner for The Best Small Fictions 2017. You can read more of her work in Split Lip Magazine, Pithead Chapel, Wyvern Lit, Third Point Press, and other places.