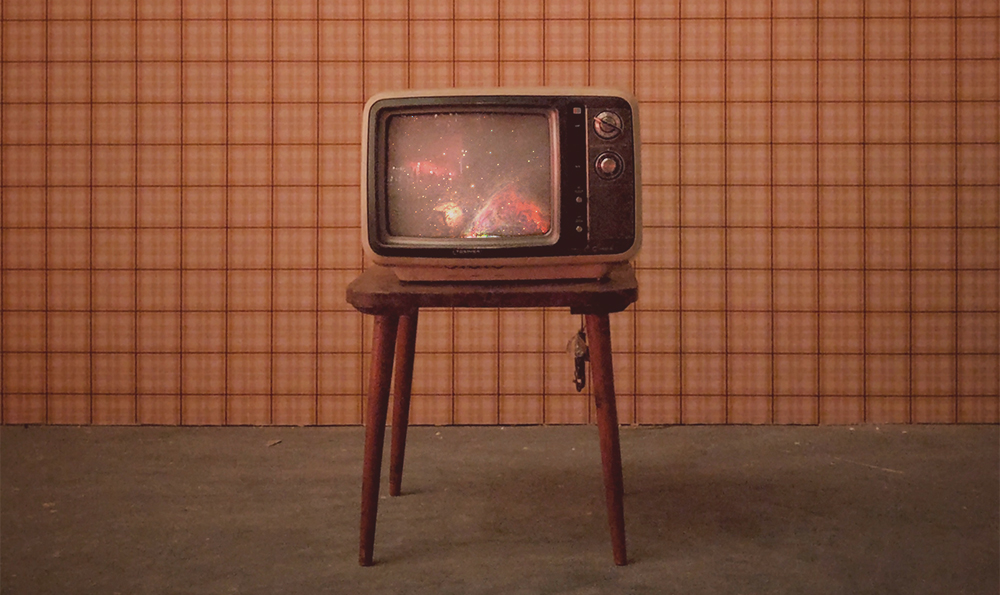 Backs of knees are pornographic. But openly
hairier. My alien agrees with me. Or, at least,
its sequins flash an affirmative when prompted.

I hate the way expat sounds, and the way
your tongue moves to say it. My alien, exorbis
…my alien, the – what’s the word for inside?

My alien likes to watch TV at 120 degrees. It
is both warm and angularly uncomfortable for
me. I try to explain to my alien, our language

consisting of bite marks on straws, of cadence
of breathing, of Latin prepositions, of his
prior world’s clicking. My alien can’t

kiss me because it doesn’t have a mouth. In this
sense, my alien makes me feel pornographic.
Or like Richard Gere. I can’t decide which.

I used to fuck a human. The kind who pees hard, and orange. He belonged
to another century, with a name to match. Our timeline was hardly a line,
something more complicated I’d rather not plot. Our last date (which I suppose

was our first), involved baguettes in 14th century Paris. He knew I was a sucker for
medieval European history. He hadn’t, apparently, ever studied the subject himself.
I left him at the will of the Black Death. That was the last time I fucked a human.

When my alien came, it came in a fog
that smelled the way bubble wrap feels.

I often let my alien hotbox the bedroom
with its former atmosphere, so its sequins

will sparkle, so it stays in my cosmos. I can
last seven minutes before fainting.

When my alien comes, it comes in a cloud that tastes like public transportation.
Its sparkles flatten to stale slime. It has even cut itself a mouth. Kissing it is like an
asthmatic playing the harmonica. It can’t speak with this new mouth. I can’t say

I’m not relieved. Life has congealed to my worst fear: commonness. If you told me
a decade ago that alien assimilation would lead to my quarter-life crisis, I would
have believed you. My likeness to Richard Gere is now out of the question.

I am not a one-alien woman. This discovery

leads to excessive space-snuffing …a habit I

picked up from my (former) alien. It appears

some vices are intergalactic. I suppose—at a

this as I vomit a comet into the toilet, on my knees,

which makes me feel pornographic and hypocritical.

I’m feeling very human lately. I must either staple

my mouth shut, or leave. At night, I watch the

sparkle behind the moon, my cheeks get hot and

pink. I tell myself that objects are closer than

they appear in the space shadows. I tell myself

that sparkles are crisper than the greens and blues.

I dial my brightness up…all the way up, for

my exorbis life, in that sparkle in the black. I’m

not a one-world woman. I wipe the space-snuff

from my nose. I’ve always had bankrupting taste.

Gwen McDuff is a Manhattan-based poet, whose nerdy obsession with aliens consistently seeps into her writing. Gwen received a B.A. in English from Harvard, where she completed a creative thesis in poetry. Her thesis, entitled "Elegies & Aliens," explores many otherworldly themes and situations (yes, aliens take center stage). She often performs at Brooklyn Poets open mics, along with other NY-based reading series.

The Pink Trailer with the Flower Boxes