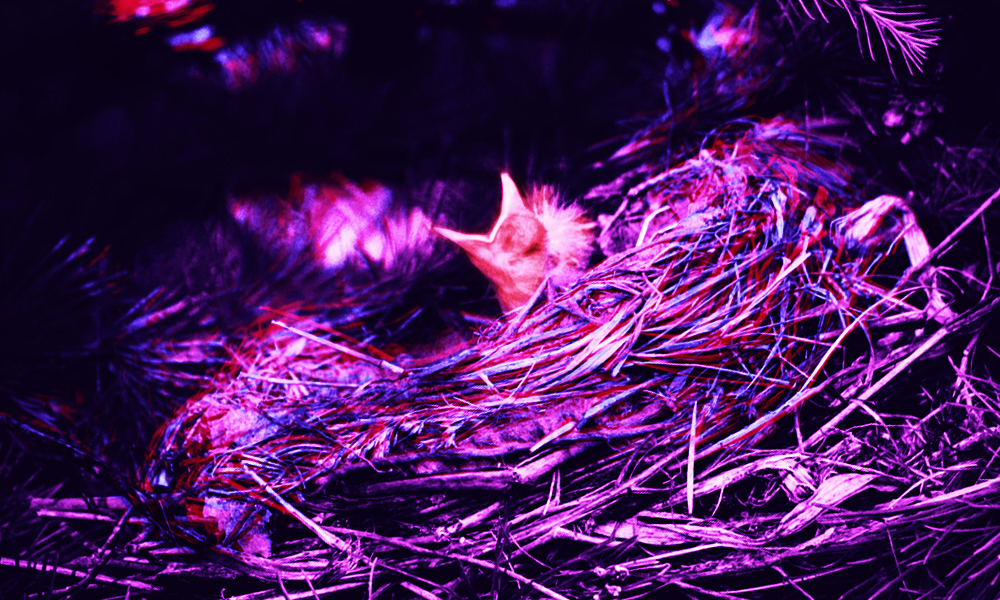 Ever (over)protective, I checked both tires one last time before you left. You were heading to Forbidden Drive — a misleadingly ominous name for a five-mile trail through Philadelphia’s Wissahickon Valley Park — to ride the new bike you planned to take to campus your first semester. When my phone rang fifteen minutes later and I saw your name, I feared a bloody accident, especially since you’d hardly ridden since your training-wheel days.

“A baby bird fell from its nest!” You were breathless as you told me where to find you so we could drive it to a wildlife rescue center. “Can you find one to take it?”

After a few unsuccessful calls, I found one that would, but only if we couldn’t get it back in its nest. “That’s its best shot at survival.” I grabbed a shoebox and drove off to find you.

The baby bird, clearly not long out of its shell, was tiny and naked and wriggling helplessly. Beneath translucent lids, its eyes were purple hull peas. Directly above, the nearest branches were much too high to reach, so we filled the shoebox with grass and twigs. As gingerly as possible, I picked up the baby bird with a gloved hand and set it inside. It weighed nothing.

On the drive, you begged the bird to stay alive as it peep-peeped so weakly it was nearly inaudible. We had a long way to go — far out to the suburbs — so I drove as fast as possible, as much for you as for it. Before I could even park, you were out of the car, shoebox gripped tight, speed-walking toward the rescue center’s door.

The burly man who logged your baby bird into their system scooped it up brusquely with his bare fingers and took it away. When he returned, he said, “Probably a robin.” He gave you an identification number for reference if you wanted to call later and find out how it was doing. I made a $50 donation, the amount encouraged with each drop-off, and then, proud of ourselves and happy, we left.

“How long can you last before calling?” I asked.

“I’m not calling,” you said immediately, definitively. “It’s guaranteed to survive that way.”

A week later, my wife and I said goodbye to you at your dorm, your new home. Just like that, after eighteen years, you were gone and on your own for the first time. It didn’t take me long to recognize the obvious symbolism at play over the last few days: you were the baby bird fallen from its nest. The symmetry was almost too perfect, especially considering your birth, which had taken place only because of the magic worked by a kind doctor and in vitro fertilization.

Isolated and alone in a laboratory’s Petri dish, you had finally come into being after a series of your parents’ remote unions. Once you accumulated a few hundred cells and grew to a diameter of one-tenth of a millimeter, you were (re)introduced to your mother via catheter while I watched alongside her, holding her hand and hoping a miracle would be granted to us. Nine months later, staring down into your dark, enormous eyes, I marveled at having once looked at you — a speck, a mote — through a microscope. I felt the clock of my life reset to zero in the most wonderful way possible, nullifying everything that had come before you.

And now you’re gone — not forever and not for good, but gone, nonetheless, and in a way you’ve never been gone before. Knowing my tendency to intrude, I struggle not to call you every few hours to see how you’re doing. It’s difficult for me to think of you as old enough to be self-sufficient; after all, you barely weigh ninety pounds and sometimes still buy clothes from the children’s section. In fact, you’re only slightly larger now than when you wore a T-shirt in elementary school celebrating A Midsummer Night’s Dream’s Hermia: “And though she be but little, she is fierce.”

That’s even more true of you now than it was then. You, whose initials are EGG, are fierce. You decide; you act. By guaranteeing the baby robin would survive, you granted it the necessary strength to do so. I’ll do my best to follow your lead.

Kevin Grauke is the author of Shadows of Men (Queen's Ferry Press), winner of the Steven Turner Award from the Texas Institute of Letters. His fiction, poetry, and essays have appeared (or are forthcoming) in journals such as the Threepenny Review, Bayou, the Southern Review, Quarterly West, and Columbia Journal. He’s a contributing editor at Story, and he teaches at La Salle University in Philadelphia. Twitter: @kevingrauke

Sleepless Night #113, A wineglassful of martyrdom