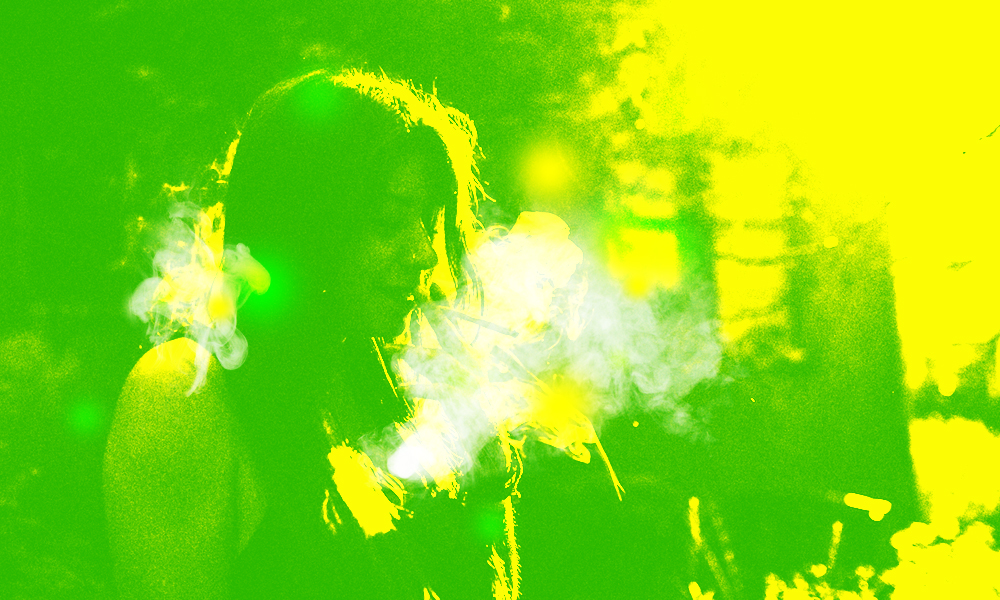 “If you ever hear a little breeze whistling out in the night, it means Pearl’s out there just a grinning and the wind’s whistling through that gap in her teeth,” one of her slightly-less-shitty boyfriends told me.

I loved that gap, the one in the middle of her front teeth. I found it inexplicably charming, like she’d been marked for mischief since birth. We were sitting out on the porch, drinking coffee and singing J. J. Cale while Pearl played guitar. A stray curl like a flamenco dancer’s lay at her cheek and her voice was smoky-low, bluesy, with a little hitch she’d throw in at just the right spot to make your heart drop. I flung mine up in a semblance of its former soprano and our voices twined. People would confuse us for each other at a distance, mistaking my dark curls for hers after she was long gone and I remained as an afterimage. She drifted from Appalachia to New Orleans to Northern California. A boyfriend in one place would start showing his true colors and miraculously her broke-down van was off its blocks and gone. I’d get a call from an unknown phone number in a different time zone:

“Hey babe. Read the cards for me. I’m thinking about heading back to New Orleans.”

I didn’t need the cards to tell her that was a bad idea.

I always thought she looked best, healthiest, happiest, when she was in a tank top and the dirty baggy jeans we swapped back and forth until they fell completely apart, a joint in her mouth and an axe in her hands, splitting firewood for a winter she probably wouldn’t end up sticking around for. One winter did catch us by surprise, and she holed up with me in my little camper through an early snowstorm. We swapped songs and sips of whiskey until we were deep into both the night and the bottle. Then the guitar strings scraped against the table as she reached over to me in sudden drunk urgency.

“When I die, I want you to be my Death. You know, like that hot goth chick in the Sandman comics? I want it to be you that appears and takes my hand and leads me to the other side.”

Long after we’d stumbled the three steps from the table to my bed, I woke to her whimpering in her sleep and curled myself around her, my arm tight across her scarred belly until she got quiet again. I woke up to an empty bed and found Pearl outside, already halfway through a pot of Café Bustelo and my tobacco pouch with the already melted snow steaming at her feet.

“C’mon, babe. Lemme make you some biscuits. Imma take a shower and head out soon.”

As she kneaded, she told the biscuit story, the one I’d heard a million times, about how she’d wrung a tampon out in the dough and made the most gorgeous golden biscuits for him. How she’d drizzled them with honey and served them with a smile. When she got to the punchline, she threw her head back and barked out a laugh, her teeth flashing all the way back to her throat.

She ended up staying for most of that winter and decided to go back to dancing for a while in lieu of making money trimming weed out west. A pole went up in the yoga studio and soon all the girls in the commune were teaching each other to carousel in front of the mirror to Beyoncé. I’d lean against the kitchen doorway with a Mason jar in hand and watch them watch themselves flip their hair over their arched backs. A few of them would drive down to Greenville where they could dance without a license and I knew I’d eventually get talked into it, having one of the only reliable vehicles on the property.

Pearl and I worked well together at the club, as I couldn’t dance a lick in those shoes but made an excellent accessory. We could be sisters. We could be girlfriends. We could give two for one lap dances. I’d lean over my cranberry juice in the darkness and shout over Led Zeppelin.

“See how pretty my girlfriend is?”

His rapt face would turn upward like a stargazer as he watched her climb the spinning pole to the top. Pearl was the only girl in the whole club that smiled when she danced, her gapped teeth flashing as she dropped the length of the pole into a box split.

The dawn air was crisp and our breath puffed in clouds around our heads as we picked our way on frozen bare feet down to the hot tub behind the warehouse. I trailed in her wake as I had all night, Pearl’s bare ass flushing pink in the cold as she juggled a bottle of champagne and a lighter in one hand, two cracked coffee mugs, a joint, and a pack of cigarettes in the other.

This was the first and only time I would ever set foot in that hot tub, at the crack of dawn before anyone was up and after I’d added an extra scoop of chlorine. A hot tub in a commune was a recipe for disaster, a petri dish for cultivating a new terrifying, sentient strain of MRSA. We pulled back the tub’s cover and climbed in as the extra-chlorinated steam enveloped us and made our eyes water. Pearl moaned as she sank into the water and closed her eyes. Then she popped the bottle of champagne, grinned, and launched into one of her torrents. She did this as suddenly as if someone had hit the fast-forward button on a tape deck. Her monologues would loop around themselves and swallow their own tails and she would get caught in her own circuit and repeat herself over and over, as if she were trying to commit her own words to memory. Like she was rehearsing lines for a play that never saw the stage. It drove everybody crazy but me.

“Here’s to us! Not bad not bad! Especially for your first time. I mean, I know we went on Tuesday but that didn’t count that was just stupid and not your fault. I told you Thursday would be our money night. Thursday’s always money night what’d I tell you? Everybody thinks I’m crazy but it’s true. You were a natural, what’d I tell you? A natural. You played that little birthday boy like a fiddle. Wanna hear my favorite toast?”

“Which one’s that?” I asked, re-pinning my god-awful-smelling hair up into a crunchy nest atop my head. No amount of chlorine could knock the smell of strip club out of my nose.

Pearl high-kicked and pointed her turquoise painted toes out of the water like a synchronized swimmer and recited:

Here’s to the girls in the high heeled shoes

We’ll take all your money and drink all your booze

We may not be virgins but that’s no sin

We still got the boxes our cherries came in!

She threw back her head and barked a laugh.

“It usually says We’ll smoke all your dope but you don’t smoke so I changed it.”

I nodded my head like a cowboy and winked. “Well, thank you.”

I was beginning to shiver, the anxiety and fear I’d stomped down with my borrowed eight-inch platforms beginning to rise up with a vengeance. My feet hurt. We clinked our coffee mugs full of champagne and sipped. I grimaced.

“This shit tastes cheap as hell.”  Like Sweet Tart candy and fruity shampoo. I squinted at the label. Was that a typo in French?

“I ain’t complaining,” I protested, draining my mug with a shaky hand.

Pearl shrugged. “Nah, me neither.”

She leaned the base of her skull against the tub’s edge and stared up at the lightening morning.

“You ever hear about sacred prostitutes? Mary Magdalene and Ishtar and all them?”

“Yeah. I heard of them” I replied, helping myself to a refill.

“They were some bad bitches, man” Pearl said to the sky while groping with her left hand for her pack of cigarettes.

That brown curl fell off her shoulder and into the water as she lit a smoke. She took a long drag and exhaled upward, and her throat was long and arched and white.

“I think I could’ve been one of them.”

Lindsey Pharr (she/her) is a Mississippi native living in a cabin in the woods outside of Marshall, North Carolina. Her flash fiction has appeared in Sledgehammer Lit and her CNF in The Great Smokies Review.

"Let’s stash our coats somewhere and go find the snack table": An Interview with Lindsey Pharr