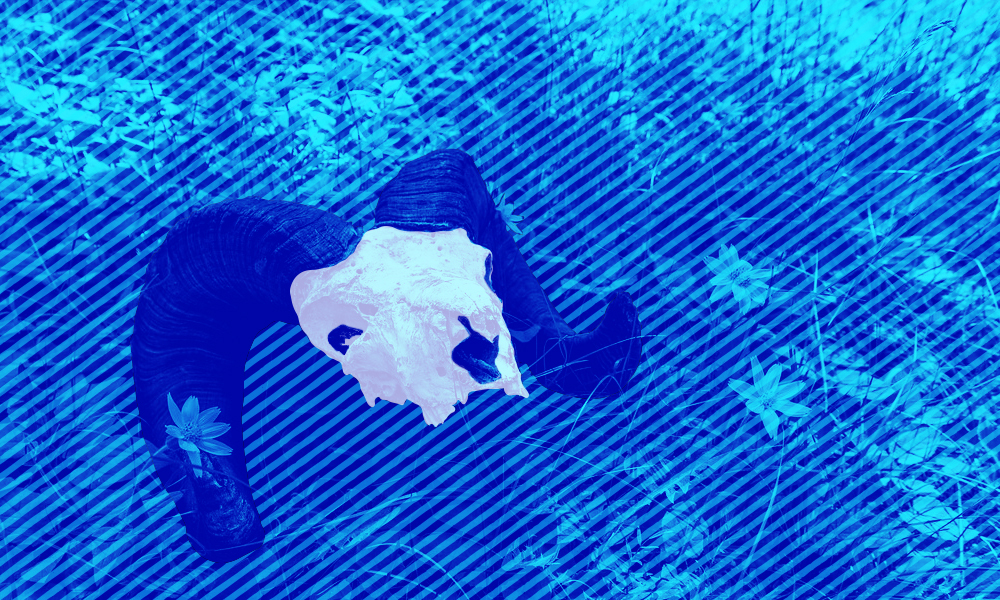 Love is like gossamer
a soft place
to rest
but I am
so very
hungry.

We knew it couldn’t work, we weren’t stupid. But also, we were a little bit stupid. We spotted each other from across the river, and something new and fragile unspooled between us. Did you feel it, too?

You were different from the others. Large and sturdy, standing alone, gazing at me in wonder. Well, you couldn’t actually see me yet—only the dew sparkling across my webs, like tiny stars scooped up, netted. I imagined how it might feel to burrow into your fleece. To feel the rush of warm blood under your skin.

There was still the problem of the river. Neither of us was a strong swimmer. Your coat would soak up water, drag you down. I would be swept away and drown slowly, my legs scrabbling with nothing to grip. We stood looking at each other for a long time. Then you turned and ambled away, back to your soft blanket of family. All the brothers and sisters and cousins who would whisper and gossip and giggle about us later. I returned to the grapevines and busied myself, weaving bitterness into silk. When a lady in red tumbled into my trap, I wrapped her up. Stabbed her. Watched her twitch and shudder. I told myself this was all I needed: a good, sweet drink.

Then you were back. Alone, like a lost cloud. I had never seen any of your kind swim before, but you waded out into the river. Began paddling. You kept your face tilted back, your mouth above the surface. Painted turtles glided around you like small moons in orbit. Eventually, you trod up onto the riverbank, dripping wet. I approached, and we looked at each other. We wondered what would happen next.

What my mother would’ve said is this:

It won’t work. A sheep is a sheep. A spider, a spider. When you were conceived I ate your father, and that’s why you and your sisters are still alive. What could you see in a creature like him? He’ll outlive you, or maybe he’ll get you killed, or maybe you’ll kill him first. He’ll make you tender. He’ll change you.

He won’t, I would’ve argued. We love each other.

No, my mother would’ve said. Darling, no.

It was the truth: for me, time raced, sputtered, for you it drifted like milkweed. I could’ve tucked my whole life into yours ten times over and still had room to stretch out. But you didn’t seem bothered.

I think we fit okay, you said.

That first day, we explored the vineyard where I’d grown up, startling birds from branches. I liked this new, foreign art of wandering. I liked how your shadow grew and grew, an overflowing pool of shade. You nibbled at a cluster of ripe grapes. Offered me one.

Thank you, I said. I don’t eat fruit.

Oh! (You didn’t sound embarrassed or judgmental, only curious.) What do you eat?

This and that, I told you, and named some of them: grasshoppers, flies, moths, mosquitoes. I didn’t mention the ladybugs, or the butterflies. I’m not sure why. We discovered that we both loved harvest moons and poetry. Your poems were lilting and abundant, full of clover and the smell of damp wool. You asked if I would share one of my poems with you, and I panicked. My poetry: all thirst and venom and sharp edges.

They’re not ready, I told you.

It began to rain. I climbed up into your wool, its coarse spirals, a whole forest of you. There was a deer tick latched to your neck, growing fat on your blood. My jealousy was all-consuming. I stabbed it and it burst. I knew better than to drink—but the smell. The color. It made me dizzy. I let the tick fall dead and I found a warm place and I pierced your skin, releasing all my venom into you. If it helps, I didn’t mean to. I didn’t plan to kill you. It just happened and it couldn’t be undone and I knew how our love would end—a smooth white skull, hollow notches of backbone picked clean by sharp teeth and curved beaks.

Only you didn’t die. You went on humming. You lifted your face to the rain.

Did you feel that? I asked you.

I think so! (Your voice eager.) An itch on my leg. A sort of tickle. Was that you?

The place where I stabbed you didn’t swell up. The mark was barely visible. I had eaten dragonflies and scorpions and roaches the size of a maple leaf, had killed a horse with a single bite, but you had to concentrate with your entire being just to feel me.

It won’t work, my mother would’ve said, but we didn’t listen. We built a strange, hidden burrow of a home. We made something together—a sack of ivory silk, tear-drop shaped. I used to catch you stealing glances at it, dewy with love. It made me want to hurt you. To find a vulnerable place for my venom to penetrate, your eyes, maybe, or the pinkish caverns of your ears.

Don’t get too attached, I told you, as gently as I could.

You don’t mean that.

Most of them won’t survive.

They will literally eat each other.

Maybe they won’t. If they’re half mine—

They’re not yours at all.

I shouldn’t have said it. It was cruel. I wasn’t even sure if it was true. I’d been eating the parasites off your back, sticky-sweet with your blood, and it was starting to have an effect on me. You invited neighbors over—half of them abominations, robins and bluebirds and other monstrous things, the other half small and succulent. There was a brave ladybug hovering around us, showing her spots. She smiled the whole time, like she knew something I didn’t. You showed everyone our egg sack.

Have you named them yet? one of the birds asked.

They don’t have names, I said, at the same as you said, No, not yet.

Your family insisted on throwing us a baby shower. It was a strange idea. Even I could see that. Still, we allowed ourselves to feel hopeful. You liked the idea that our children would be tolerated. Maybe even welcomed. I liked the idea of becoming a social creature. When I was with you, it seemed possible: stopping over at the orb weaver’s, our children exploring the cathedral of her web.

Didn’t an orb weaver kill your mother? you asked.

I’m not my mother, I said, and you sighed a little.

The party was being held in your old meadow, which meant we would need to cross over. We went separately, you swimming—more confident this time, after having done it once before—me riding the sloped shell of a painted turtle, carrying our egg sack with my spinnerets. On the opposite bank, I scuttled up onto your back, safe again. You were gazing down at something: a ram’s skull. A few days earlier there must’ve been a decadence of flies buzzing around it, but the bone was too clean for that now. I stared at it, fascinated. Your skull was smaller and shorter than this one, your horns only half the size. But the differences seemed negligible. I wanted to crawl into the hollows where the eyes used to be. I wanted to fold up on the bridge of its nose and sleep for days.

You bleated once, with deep sadness, and we continued on.

The party was a mess of noise and color—your siblings and cousins leaping around, fleecy and cheerful, turtles basking here and there, snakes daring to poke heads out of tall grasses, birds strutting, their beaks primed for killing. Ladybugs swirled around us like confetti, and you pointed it out, as though this was a gift you were giving me. It made me dizzy. It made me hungry. I understood, with vicious clarity, that I wouldn’t be stopping over at the orb weaver’s. That our children would turn out like me, and you would name them, every one, and I would not forgive you.

You saw the look on my face and thought I was nervous about the birds.

Don’t worry, you said. They won’t bother you. Not while you’re with me.

My three remaining sisters hung upside down from an old fence, showing off their red hourglasses. Marked, just as I am. We are deadly! that mark proclaims. Eat if you dare! I had never seen my own mark—how could I?—but you reassured me that it was there.

On the way back across the river, the painted turtle was drunk on pine sap. She kept bumping into logs, drifting off course, forgetting I was there.

What a party! she said.

It’s such a nice thing, the two of you together.

Well, folks do talk, she said. A creature has to wonder. But don’t you worry about gossip, sugar plum. I have a sense about these things. I can see you’re in love.

We reached the riverbank first, and I dragged the egg sack onto dry land, and you came splashing up after me. You got down on your forelimbs and gazed through the yellowing silk, counting the tiny, fragile promises inside. Six, seven, eight, nine…

There are too many to count, I told you. Two hundred, at least.

Nettle, I suggested. Nettie for short.

I like it, you said, and my exoskeleton quivered.

Back home, we spread out the party gifts. You nibbled at a sprig of grass, then checked on our eggs again—unchanged—while I strung up a trap to catch tomorrow’s breakfast.

It’s amazing, you marveled, back when you used to watch me work. How it looks so fragile, but never breaks.

I released the last thread and tried to see my handiwork through your eyes: tattered, chaotic, a mess of string. But you weren’t even watching me. You were resting on your belly, mumbling names under your breath. I found a scrap of birch bark. I wrote you a letter. More of a poem, really. Only six lines.

Later, in bed, you stroked the crimson of my underbelly, the only part of me I would never see. There was a spot of red on you, too, just behind your neck—a drop of blood?

No. A ladybug, picking her way through the overgrown hillside of your body. How long had she been there? Could you feel her, the way you used to feel me? Or had you only ever pretended?

She vibrated her wings. Alighted from your body, winking. My trap glistened along the wall, and I hoped she would hum toward it, tumble into the threads, stick there. I could almost taste her. But she saw my trap, dodged it easily. She found the open window and went out like a candle.

Lindy Biller lives in Wisconsin with her husband and two kids. Her fiction has recently appeared at Chestnut Review, X-R-A-Y, Superfroot Magazine, and The Lumiere Review. She works as a writer at a game design studio and research lab.