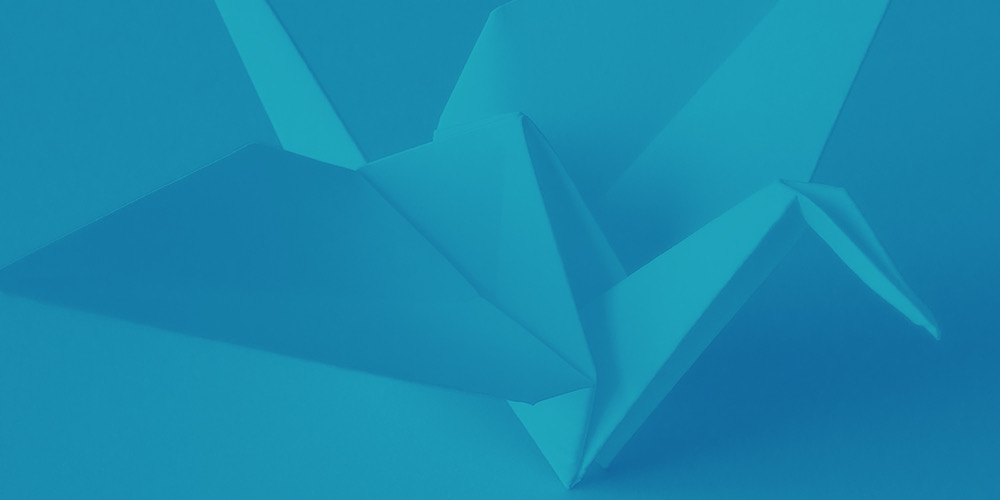 The statue of Mary extends a hand from her alcove by the altar, as if she’ll swap her cloister, her blue robes, and her thin stone lip for your chartreuse, corset-back gown and an hour pass to Cassidy’s reception in the church basement. It’s a tempting offer. At the statue’s bare feet are a champagne flute, a bottle of Prilosec, and a Post-it note bearing someone’s drunken scrawl. “For your heartburn,” it says. In the twilight, the sacred heart painted on the statue’s breast looks like it’s pulsating to the DJ’s raving bass.

You touch your fingers to your closed eyelids. The sanctuary’s air tastes smoky, singed: like when you and your sister larked with Cassidy, then underaged, to a dive bar and got her so drunk on bourbon that she folded napkins into origami cranes and set the wick of her Bic lighter to each one, right there at the bar. And the bartender didn’t even kick you out until Cassidy cupped a burning crane in her palms and caught her own hair by accident.

The reception music still throbs behind your eyes like a migraine, waves of sound that you see in spirograph patterns of purple and teal. It’s best not to think of the striating colors, the music, the way the dance lights strobed off the church basement’s ceiling like a flying saucer’s landing gear. Except for you and your sister, the entire bridal party was as brain-scrubbed as alien abductees: the best man had smuggled in tabs of E, which all the others chased with too much champagne. Cassidy had insisted.

Under the ashy smell of the chancel air, there’s a hint of something mulchy—like wilted lettuce, like lilies sweet with rot. Though, that may be your deodorant, emitting the pheromones of an anxious bridesmaid. You frisk the ceramic of Mary’s robes, which are cold and pastel as the spring rain. An impish Christ clings to her hip. The curve of his spine and his thrust-out ass give him a profane look, like he’s grinding against Mary.

You rub your shin, where the bone still aches. That damn ring-bearer. A five-year-old cousin of the groom’s, the ring-bearer had latched onto your leg before the processional. He pumped and pumped and yet you got hell when you open-hand slapped the imp. The photographer had laughed at it all, god damn him. His camera never stopped flashing.

With a grunt, you steal it all from Mary: the champagne, the Prilosec, the note. Thank God there’s a pew in the chancel. You down the bubbly like a shot, take a couple of the Prilosec dry because there’s an unholy fire of acid reflux boiling your heart and lungs into a suet. You make faces at your reflection on the gold façade of the tabernacle until your cheeks ache.

You slump back into the pew. The wood is darker than those arranged in their uniform ranks in the sanctuary. You trace the scrollwork of the wooden pew with your fingers. The grooves are deep, black, curled like whorls of smoke gracing from a bonfire. If the Cassidy-mandated lace choker weren’t already tight as chastity around your throat, you might’ve felt your breath cork your esophagus. The hours to sketch those lines, to set a chisel’s tip to the wood, to wear it smooth with a coarse-grained sandpaper, to stain it pitch dark. All that damn work.

Something behind you rustles, stiff and burlap-coarse. It is a rustle reserved for the rough-spun of cassocks, the crinoline of wedding gowns, and the feathers of startled crows caught plumage-deep in a roadside carcass. It can’t be Cassidy because she’s dancing and will be until half-past four, when you’ll be summoned to the bridal suite and deputized to hold back her hair while your sister tries to settle the groom down with an alarming number of bourbon shots.

There’s a scuff of cloth, a tickle of breeze like a wing rushing by. The priest lowers himself to the pew. His hair is brindled with grey, and he wears blue, wire-framed glasses, like one of your old English professors, who secreted a bottle of sherry in his desk but believed no one smelled it on his breath. The priest leans forward and laces his fingers together. He grunts. His breath smells sour with the malaise of a wedding buffet: roast beef and cream cheese frosting and cake with the texture of sawdust.

You slide against the pew’s armrest. The priest doesn’t move, but he splays his knees a bit. Either your gown’s corset back has loosened or you finally let yourself breathe again. “It’s a beautiful pew,” you say.

“Not particularly,” the priest says. He tilts back, flings his arms over the pew, and gawks at the church’s stained-glass titans: Christ, Peter, the Blessed Virgin. “Not at all,” he says.

The floorboards tremble and an EDM whoop plays up your ribs like mallets on a xylophone. Neither the champagne nor the Prilosec has helped.

“Your first time in Blessed Sacrament?” The priest smacks his lips. He reaches inside the folds of his cassock and produces a flask. He screws off the lid, takes a long pull. He passes it over. You shouldn’t. So you take a sip of it—rum—like you might’ve taken that hit of E, if Cassidy hadn’t insisted. The priest says, “This pew is all that’s left from when the original church burnt down in 1959.”

“A few priests ago—this was Father Gannon. Real issues, the man had. He set fire to the church, back in the spring of ’59.”

You open your clutch. It matches the green of your dress, a dye job that Cassidy had insisted on. You take out the tissue folded around a hunk of brownie. You break the brownie and pass half to the priest. He shakes his head. When you tell him it’s not a normal brownie, that your therapist side-hustles as “an herbalist” and insists that her punny line of “baked” goods will help your anxiety, the priest relents.

He wedges the brownie into his mouth, sucks the crumbs off his fingers. “Not since seminary,” he says. He whistles through his nostrils, then says, “There’s not much to say about it. It happened at night and nobody knows who called the fire department. Maybe nobody called. When the parishioners came to mass, they found Father Gannon standing on this pew. He was naked, his arms were outstretched, and he was reciting the mass in Latin.”

The floorboards mutter from the DJ’s bass speakers. Your shin aches. You wait for the brownie to kick in. The priest takes your hand in both of his; he slots a cold medallion, no bigger than a pressed souvenir penny, between your fingers. Despite its nicked edges, your skin knows the flowing robes stamped on the medal: Mary, free of any impish Christs, with light beaming from her palms. Your name echoes in the rafters and your small clutch buzzes: your phone’s screen emanates a rapturous light. Probably Cassidy, insisting, but for now you aren’t answering. The wood beneath you is hot and smooth and dark as bourbon.

You touch your tongue to the roof your mouth, dank weed tinged with sweetness. Neither of you feel anything, but the sacred heart on Mary seems to glow like an ember fanned. You slip your hand into his and take turns squeezing each other’s fingers.

Patrick Thomas Henry is the fiction and poetry editor for Modern Language Studies. His work has recently appeared in or is forthcoming from the Massachusetts Review, Souvenir Lit, Fiction Southeast, Clarion, Passages North, and North Dakota Quarterly, amongst others. He is Instructor of Creative Writing at the University of North Dakota. You can find him on Twitter @Patrick_T_Henry.

The Second Coming of Mary