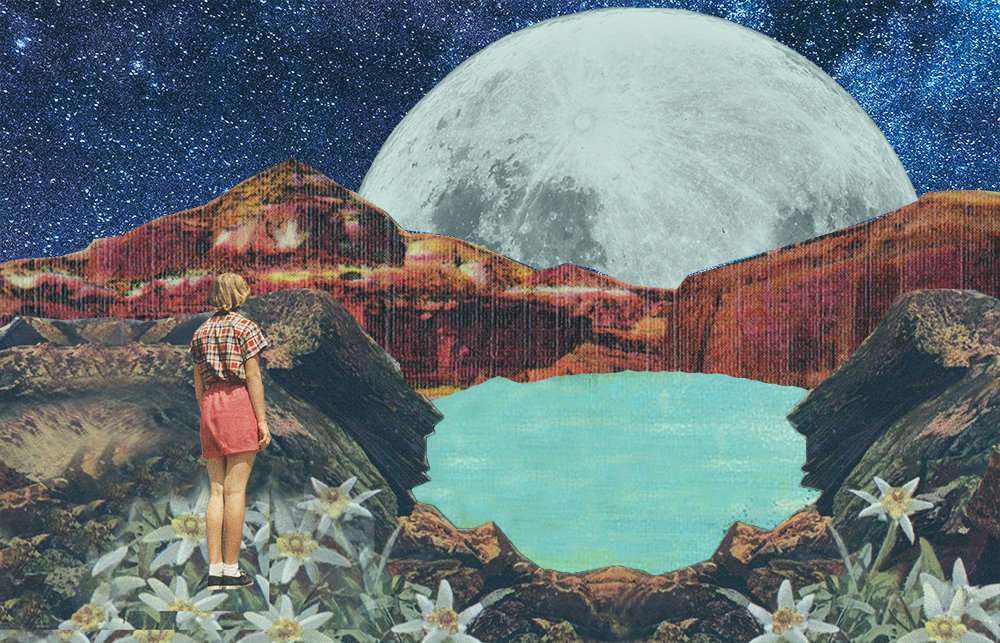 “Tape the sound of the moon fading at dawn. Give it to your mother to listen to when she’s in sorrow.” – Yoko Ono

They smelled of bubbling cheese and baked tuna, or chicken, or beef. They smelled of generosity and a touch of guilt. They were guilty of good health: they could make this casserole or baked spaghetti or chili, and pass it along to us, who couldn’t.

I always answered the door. Or, at least this is how I remember it. I remember the sudden warmth and solidity of the meal in my hands.

“Don’t worry about getting that dish back to us!”

Then their eyes. It was always the same. They’d peer around me, casually, feigning an interest in the house, but I knew what they were looking for.

I could always tell they were disappointed. Maybe they wanted to hear a thank you from her, a weak one passed through chapped, pale lips. Maybe that’d really sell it for them.

Sometimes she was feeling okay enough to come to the door. She’d appear at my elbow, quiet as a whisper.

“I’m doing fine, actually,” she’d tell them, but I knew they never believed her. The evidence of her lie was standing in front of them.

Their offerings filled the fridge. Then the freezer. Pan after pan of noodle bakes, creamy casseroles, and lasagnas. Stack upon stack of freezable, re-heatable dinners. Most of them would get thrown out, eventually, my sisters and I favoring microwaveable mac and cheese to cold noodles and congealed parmesan. Dad was never home to eat with us anyway, and the chemo made it unthinkable for mom to eat anything but ice chips and the occasional bowl of broth. Sometimes a piece of white bread.

We’d accept their meals anyway, and when their children asked us in school if we’d eaten it yet, we’d always say yes. It was delicious.

It must have been the hottest day of summer when she told us. I remember the sun, how it beat down on us, unrelentingly, not caring that we had the weight of everything on our shoulders already: they’d burn anyway. I remember the hot wood slats of the deck on the backs of my thighs. The red marks left there.

“Let’s go in,” my sister said after a time, sweat beading on her forehead.

But I stayed. I could hear voices through the windowpanes. They were muffled—distant, as though I were underwater. I wanted to stay there.

After that the days grew colder. Soon leaves started to fall, and mom awoke to clumps of hair left on her pillowcase, so she got out dad’s clippers and told us to shave it all off. It would be fun, or so she thought; none of us wanted to hold the clippers. We all cried when the last strand floated to the ground.

“It’s okay,” she told us. She took my little sister’s hand in hers, touched it softly to her head. “See?”

I remember thinking her head looked like the moon: covered in bumps and divots. I wanted to explore the topography of her scalp, but instead I clenched my hands into fists at my sides until my fingernails left half-crescent indents on my palms.

Nighttime was the worst, especially the first couple of days after treatment. The house would grow dark, and as everyone else drifted off to sleep, she’d pace. She became nocturnal. I’d hear the floor creak under her withering weight and the toilet flush away her vomit. I’d hear her groaning, because her bones ached so badly that even the softest pillows underneath felt like cement.

I never got out of bed to check on her. Looking back, I think I should have. I think I was afraid of what I’d find in the dark, so I’d just close my eyes and wait for morning.

“It’s easy,” my grandmother told me. “You just reach inside and pull all the stuff out.”

I eyed the chicken. “That’s gross.”

Its flesh was cold and dotted, like it had goose bumps. I held my breath as I reached inside and felt for the softness of its organs. I pulled them out and dropped them as quickly as I could into the garbage. There was a tiny stomach, liver, and heart in there, somewhere, indistinguishable to me. The heart doesn’t actually look like how you think it does.

“Good job,” she said. “Little salt and pepper is all it needs, and then…” She popped the top of the beer can. It hissed like a snake. “Then you just shove this in.”

Eventually, though, mom would call us back home, and no matter how exhausted or sick she was, her voice would ring through the darkness like a beacon, finding us wherever we were.

“That’s it. Now you can make dinner on nights when she doesn’t feel well.”

“Did your mom teach you this?” I asked her.

She slid the chicken into the oven, and a heatwave hit my face, reminded me of summer. Reminded me of that day.

“She must have,” she said. “Don’t we learn everything from our mothers? She made far more elaborate meals than this, but it’s easy in a pinch. Your dad always has beer.”

“The parents from school stopped making us food,” I told her. I thought of the surge, how they used to show up, one after another after another at our front door. How the bell would ring constantly. Now it was quiet, the waves receding to black nothingness.

“Well, people have their own lives. Besides, you have to be sick of casseroles, huh?”

Mom always wore a scarf on her head to treatment. Didn’t bother with the wig, and it was too hot anyway, especially since the hot flashes started. I thought she looked better in the scarf. Tougher. More like herself.

I only went to one treatment with her. That was enough. The nurse sprayed the port in her chest with numbing solution. It came out like a breath of snow. Then she plugged the needle in, as though mom were an outlet. Hard and fast—and I swear her skin popped when the needle broke through. Mom sucked in air, a quick hiss through her teeth, and I knew it hadn’t numbed in time.

I knew she was lying, but I didn’t know what to say to her, so I didn’t say anything.

Looking back, I don’t know that she ever cried. I mean really cried, letting the tears run down her face, spilling onto the floor, drowning us all.

I spent a lot of time playing with our neighbors back then. Since mom couldn’t drive us anywhere, we had to stay close to home. My favorite game was a blend of hide-and-go-seek and tag. I especially loved to play at night. We’d scatter around the yard and in the sliver of trees between our houses, hiding and holding our breath, which seemed so impossibly loud in the dark. We’d wait to be found, to be chased.

I was good at hiding. The secret is not wanting to be found. I’d hunker down—in a bush, under the deck, or behind the garage—and wait. Surrounded by nighttime and thick trees, it was as though I was stranded in the middle of the ocean. You couldn’t see anything, really, and what little you could was illuminated only by the moon.

What I do remember is feeling free, like I could be anywhere or anything. I didn’t have to be there: accepting casseroles or shoving beer cans inside of chickens or staying quiet because I couldn’t find the words to say.

Eventually, though, mom would call us back home, and no matter how exhausted or sick she was, her voice would ring through the darkness like a beacon, finding us wherever we were. And we’d run through the moonlight back to her.

She felt like less of a woman, she told me.

The cancer was hormone-based. Estrogen only made it stronger. I was eleven and didn’t really understand any of it. Chest too small for training bras, I hadn’t even gotten my period yet. In school, our sex education course, which lasted one day and left us pink-cheeked and unable to look at the boys for a week, covered menstrual cycles and childbearing. Girls who had their period became women in a blink of an eye. I was still a girl. Tampons and pads were just things that absorbed blue liquid on TV. They were just things I no longer found in my mother’s bathroom drawers.

I wanted to tell her that it didn’t matter, but I could see that it did. Besides, sometimes it’s better just to be quiet.

In school, I also learned of the power of the moon—how it controls the oceans, the tides. Us, even. Women are lunar beings. The moon affects our bodies and cycles. There is a constant ebb and flow to our body and what comes from it.

Two years later, I would be thirteen, and mom would be free of the cancer. Her hair would grow back, soft as a peach and darker than normal, and on the coldest day of winter, I’d wake up bleeding. For some reason, I’d think of that chicken, how I pulled out its guts, much like the doctors did to mom. I’d think of sticky casseroles, of the ebb and flow of neighbors and friends’ parents, pounding and pounding on our door, as though we were a single lighthouse in the middle of a raging ocean. As though we were a refuge. I’d think of my mother—just downstairs, still there, despite it all. I’d think of her scalp, think of her as the moon, calling me home.

Hannah Gordon is a writer and editor living in Detroit, Michigan. She's the managing editor of CHEAP POP. Her stories can be found or are forthcoming in Hypertrophic Literary, Jellyfish Review, Synaesthesia Magazine, WhiskeyPaper, and more. When she's not writing, she's hanging out with her cat and watching cooking competitions. You can follow her on Twitter at @_hannahnicole.