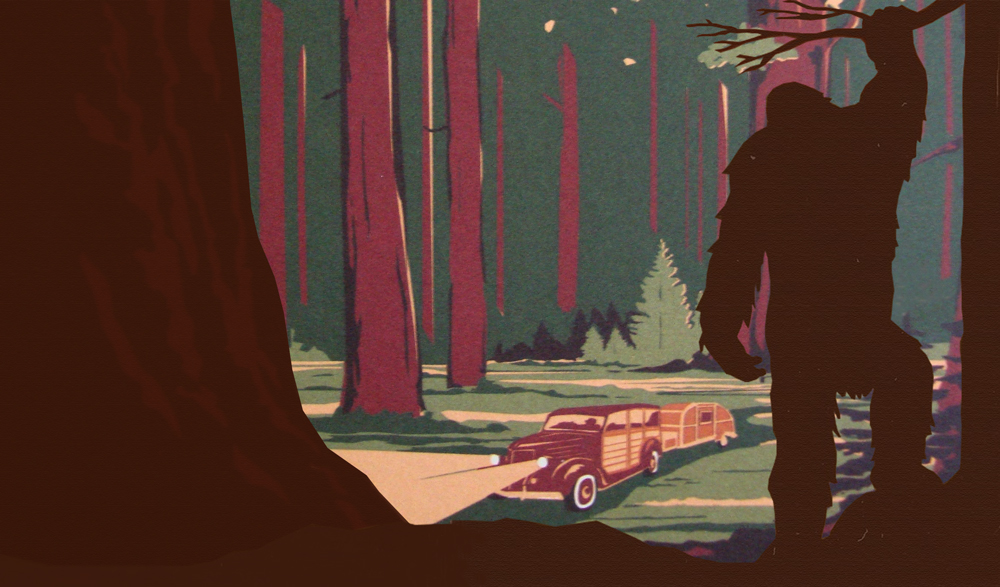 Bigfoot has been feeling lonely lately, wondering – self-indulgently, masochistically – what the plural of Bigfoot would even be. Bigfoots? Bigfeet?

It’s purely hypothetical. There are no others out there.

Bigfoot has been reading Mary Shelley—a battered paperback stolen under cover of night from the Lost and Found of a nearby campground—and feels, for the first time, truly seen.

Bigfoot goes down to the side of the highway to watch the cars go by, big body contorting to hide amid the bushes, hairy knuckles pushing back the branches. The flatbed trucks are Bigfoot’s favorite: drawn to Bigfoot’s scale, too big to break.

A red minivan goes by with one of those novelty bumper stickers taped across the trunk: “Bigfoot doesn’t believe in you either.”

But I do believe in you, Bigfoot thinks. You can do anything you set your mind to.

There isn’t a person on this earth who knows how sweet Bigfoot can be.

That night, Bigfoot wanders dangerously close to the edge of the campground. It’s been a day for being reckless.

Through the leaves, Bigfoot can just make out a clearing where a group of humans sit around a campfire telling stories. They laugh with each other and touch each other’s shoulders. There’s something deep in Bigfoot’s insides that twists and pulls and aches.

There isn’t a person on this earth who knows how sweet Bigfoot can be.

Instead, Bigfoot stays still and listens.

“I swear to god,” the human says, holding a bottle aloft in a tiny, fragile hand. “It couldn’t have been any other animal! Animals don’t make noises like this.”

“And did you happen to record this “mating call” you heard, or do you just want us to take your word for it?”

There’s movement, the human shuffling around, unearthing equipment from one of their bags. Then a canned sound plays, spilling out through the clearing from a shiny black box. It takes a second to become recognizable.

This is Bigfoot wailing. Bawling. Sobbing into a pillow of moss.

Bigfoot can’t listen, staggers away. Embarrassed to have been caught in an ugly-cry.

Later, when Bigfoot falls asleep and dreams, it’s of being chased across an icy landscape. Of wrestling with a handsome doctor in the arctic snow. Of the feeling of his calloused, clever hands in Bigfoot’s fur.

Phoebe Cramer is a queer writer and performer based in Brooklyn, NY. Her work has appeared in Meow Meow Pow Pow, Obra/Artifact, NonBinary review and elsewhere. She is part of the acquisitions team for VIDA Review and a volunteer bookseller at Housing Works Bookstore. Sometimes you can find her on twitter @PhoebeLCramer.